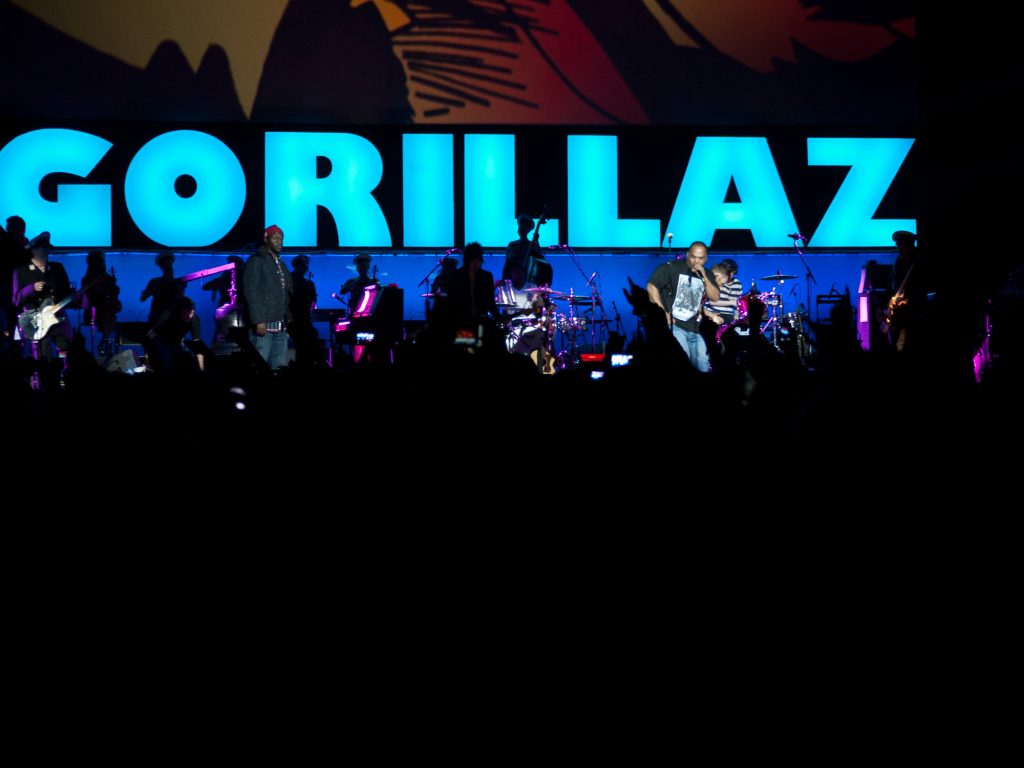 There’s nothing better than when the stage lights go out.  The crowd cheers. Smoke fills the stalls. Silence falls upon the arena.  A silence that is so brilliantly broken by the ten and a half minutes ‘M1 A1’ and Damon Albarn screaming “Hello! Is Anyone there?”.  As the bass kicked in and the stage was illuminated we saw the entirety of Gorillaz fronted by the very genius responsible for it all.  Imagine your favourite cartoon as a kid coming to life. Now imagine them being everything you ever expected and more… That’s Gorillaz.

Albarn took the role of 2-D.  The blue haired and black eyed mentally deranged lead vocalist.  Almost monotone singing provided the alternative edge of the Gorillaz sound.  Albarn took the lead on track’s such as the driving ‘Rhinestone Eyes’, and the trans inducing ‘Every Planet We Reach Is Dead’.

Jeff Wootton played the position of Noodle, a young Japanese ex super-soldier.  Wootton was the unsung hero of this gig; armed with a Fender Jaguar he destroyed the ‘Feel Good Inc.’ solo better than the record.

Seye Adelekan embodied the crazed Murdoc Niccals on bass.  Green Skinned Murdoc was the apparent former of the band after hitting 2-D with a car. When the beautiful masterpiece that is ‘Andromeda’ was played it was hard not to notice Adelekan producing a bass undertone that shook the room.

The animated band is completed by Karl Van den Bossche and Gabriel Wallace sharing the icon that is Russel Hobbs on drums and percussion.  The American hip-hop hard man could only be represented by two drummers duelling with each other throughout the concert.

The big screen behind the band put context to every song.  ‘On Melancholy Hill’ was the biggest highlight. The slower more relaxed piece with a psychedelic feel sent the crowd into the soul of the story displayed behind.  A cheer erupted as the smoke parted on screen and there on melancholy hill was ‘Plastic Beach’, a glimmer of hope for the dark tale.

The biggest question approaching the show was who will feature?  The first guest appearance was by the legendary Pauline Black who represented Grace Jones on ‘Charger’.  And when I say she was legendary. She was fucking legendary. Her chemistry with Albarn took the song to another level.  However, young rapper Vince Staples stole the show with his verse in ‘Ascension’. “The sky’s falling baby, drop that ass ’fore it crash” is an ironic lyric, as Vince Staples in fact rose the fucking roof.

The comforting sight of two members of De La Soul is a good way to end this review.  Appearing on two of the five albums, the house favourites of ‘Feel Good Inc.’ and ‘Clint Eastwood’ made the crowd move in a way I had not witnessed before.  Never have I seen a whole arena dancing from the front to back. As a circle screen was lowered mid-air representing the sun ‘Demon Days’ left me stunned. They were exceptional.  No… Beyond exceptional. They were Gorillaz.