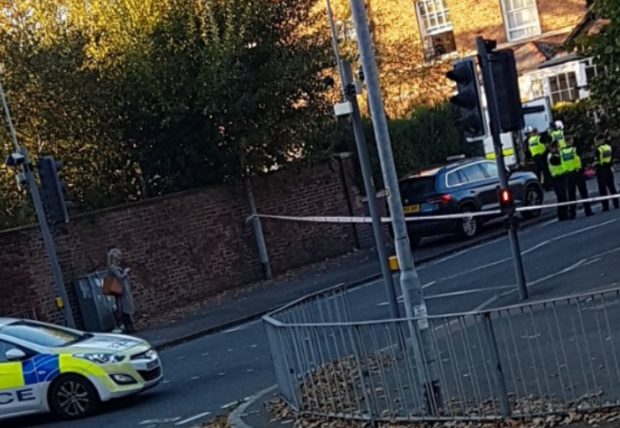 The following story was sourced and produced by first year student Daniel Noble on the Journalism Newsroom module. From first year onwards, students are encouraged to cover real-world stories that could potentially be published by local and regional news organisations. Stories will also be submitted for assessment as students develop news instinct and skills required to make the step into industry.

Residents have been left in the dark after being evacuated from a Chester street by police due to the discovery of a “suspicious substance”.

The residents that were caught up in the police operation in a property in Abbot’s Grange, Liverpool Road on 20 October are still to be informed of what caused them to be evacuated from their homes and what was done to resolve the situation.

Officers attended the property and discovered an “unknown substance” and subsequently the bomb disposal unit was called, and a cordon was put in place to close the road from Victoria’s Crescent to the Morrisons roundabout.

The bomb disposal unit dealt with the issue, but an eyewitness said it was over three hours after the evacuation before the residents were allowed back into their homes.

Cheshire Police said an “unknown substance” was found in a bedroom and added that residents were only evacuated as a precaution.

Other than the basic information released by the police, Abbot’s Grange residents have not been given any further information about why they were evacuated or how the situation was dealt with.

Paul McGreary, 57 who refused to evacuate his property as he believed the police didn’t look too concerned said: “The concern is the lack of information and transparency about what’s happened. I don’t understand why the police haven’t provided us concerned residents with some clarity.”

Other eyewitnesses also reported that no one at the scene was given information on why the road was closed. Max Weston, 18, who lives on Liverpool Road, said: “I was watching the incident for a few hours and had no idea what was going on, I even spoke to some of the people that live there and they didn’t know why they were evacuated.”