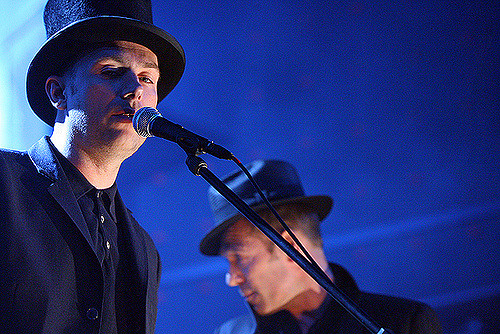 Students on the BA Music Journalism course get to grips with a contentious and contemporary issue – Brexit, when reviewing the latest album ‘Merrie Land’ by ‘super-group’ The Good, The Bad and The Queen. Kevin Cummings and Olivia Owen refuse to hold back on this recent release from Damon Albarn and Co.

Eleven years ago, British supergroup The Good, the Bad & the Queen released their self-titled debut album and now they’re back with ‘Merrie Land’ a concept album about Britain and Brexit. The Good, the Bad & the Queen harbours some true musical talent with Blurs Damon Albarn, The Verve’s Simon Tong, The Clash’s Paul Simonon and afro-beat legend Tony Allen. The ever-so pretentious Albarn who fronts the group sings about ‘disconnected’ leaders who’ve been ‘raised in mansions’ when he probably spends most of the time in them.

Damon Albarn’s mind-numbing voice guides the listener into purgatory as he rambles on about leaving the E.U and Britishness. Albarn and co spent much of their time travelling to small British towns and seaside resorts to get a feel for the album and to gather opinions on Britain’s current political state.

Despite the album being monotonously boring throughout, the music gives you a sense of nostalgia with the elements of carousel music and so on. I couldn’t help but daydream about times gone by and because of this I completely forgot that the music was playing. Merrie Land is about as entertaining as watching grass grow or paint dry and that’s partly down to Damon Albarn’s relentlessly mundane voice. It’s music you can’t sing along to, music you can’t dance to, and music you can’t enjoy without falling asleep to.

“Would I recommend it to a friend?”

The band described the album as an “a reluctant goodbye letter to the European Union” and the music and lyricism projects that to the listener quite obviously. A lot of the publicity around the record focused on Albarn’s views on Brexit, what does he know? He spends a large amount of his time outside of Britain. He’s just another wealthy globalist who lives on another planet. Brexit gave Britain the opportunity to be great again, leaving the E.U gives us the potential to control our law-making, borders and money. His logic is about ridiculous as his music. We all know he’s a has-been, a fossil from the ’90s.

Merrie Land’s music is far from contemporary, it’s hard to put your finger on what genre to call it. Maybe a unique branch of alternative folk rock I suppose if that makes any sense. Would I recommend it to a friend? Not at all. It’s an album that had a lot to offer with a plethora of instrumentation and ideas however it failed to resonate and achieve its aim. Merrie Land is short of that one thing that’ll give it some punch, something to wake you up and really make you listen. The album becomes repetitive and plods along, growing thin in entertainment. It’s hard to tell the difference between any of the songs, it’s a continuum of dreary singing and slow-paced instrumentation. Merrie Land is about as flavourful as sludge.

“The instrumentation only adds to the record’s gloominess and bleak atmosphere.”

After 11 long years, Damon Albarn’s part-time supergroup The Good, The Bad & the Queen have returned, and they have a lot to say.

Along with Tony Allen, Paul Simonon (The Clash) and Simon Tong (The Verve), Albarn’s star-studded line-up has created an intensely political album in a time where most people want nothing more but to escape from politics. Recorded in Studio 13 in London, like the band’s last studio offering, Merrie Land has a massive sense of Britishness surrounding it, with the track listing revealing titles such as ‘Nineteen Seventeen’ (a reference to World War I) and ‘The Great Fire’ (of London, in 1666).

Kicking things off with the album’s title track, it’s hard to ignore the lyrical content written by Albarn. The opening line ‘If you’re leaving please still say goodbye’ can pretty much only be interpreted as a statement about Brexit, every Brit’s favourite topic of conversation…or not.

It’s clear from these lyrics that Damon is holding out hope that Brexit, if it happens, will be a smooth, amicable process and not a case of Britain fleeing away from the EU like they’ve just had a lover’s quarrel.

As the rambling vocals continue, lines such as ‘This is not a rhetoric/It comes from my heart/I love this country’ are a promise from Albarn that he’s truly appalled at the state of the country and he believes that it’s his duty to speak out against the disaster that is Brexit.

Finally, we only need to look at the song and album title, ‘Merrie Land’, a reference to England being historically perceived as somewhat of a utopia. Albarn sees Brexit as a movement where older generations wish to see Britain return to the non-existent ‘good old days’ of England being a ‘merry land’.

Musically, the entire album reminds me of a nightmare. Throughout the almost 40-minute journey there are a variety of instruments used, somehow creating the aura you’d expect to find at an abandoned funfair.

The instrumentation only adds to the record’s gloominess and bleak atmosphere. However, I have to give the band credit for their mixing of genres, as it’s difficult to define which genre the album actually is. At some points Merrie Land sounds like a dub record and at others it sounds like a folk-rock record.

Unfortunately, after the title track, Merrie Land does little to keep me hooked. Every song feels very similar, like you’ve already heard it a couple of minutes prior. There’s a lack of anything that could be considered any faster than mid-tempo, but I suppose that’s to be expected when the band is in a sour mood due to the train wreck that is Brexit.

To me, listening to Merrie Land is just a complete and utter borefest. Even if you’re a fan of Damon’s work with Blur and Gorillaz, this album sounds very different and much more mature, both lyrically and musically.