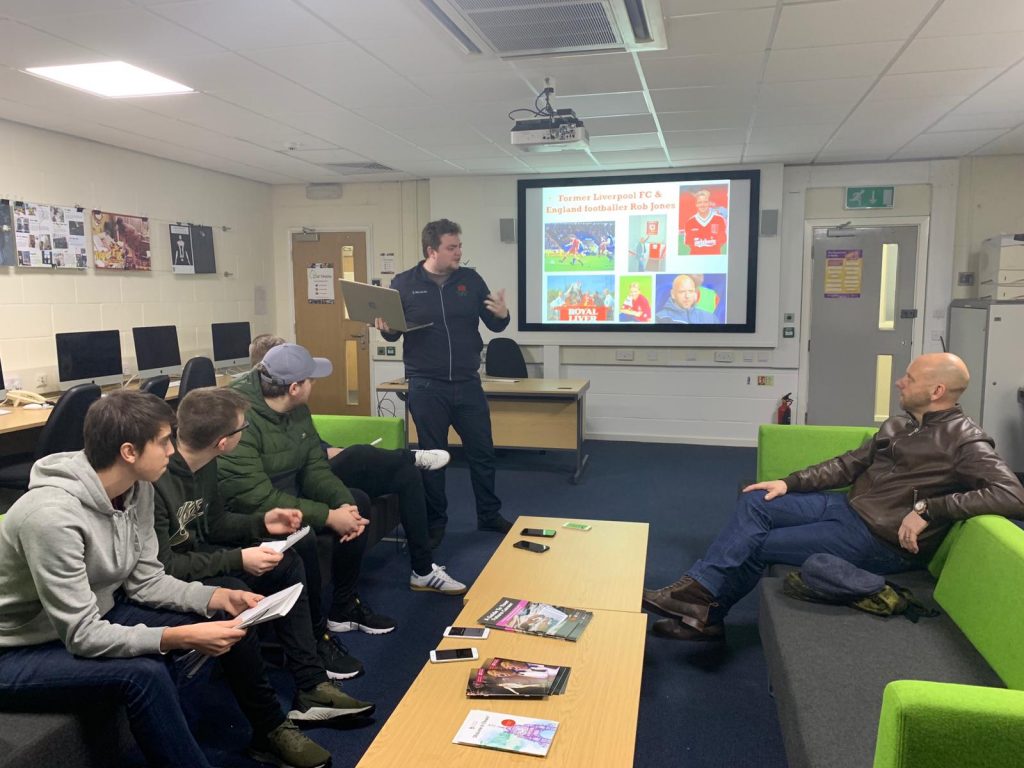 Jones made 243 appearances for the Anfield club and was capped eight times by his country before injury cut short his playing career aged just 27.

Now a successful businessman, Jones is still involved with Liverpool as a mentor to the club’s young players, including the likes of rising star and England international Trent Alexander-Arnold.

Jones visited the University of Chester’s Parkgate Road campus where he was quizzed by first year Sports Journalism students on topics ranging from his own playing days to the next generation of talent breaking into Jurgen Klopp’s team.

Trent Alexander-Arnold can be ‘best in the Premier League’

Former Liverpool defender Rob Jones believes Trent Alexander-Arnold could become one of the best right-backs the Premier League has ever seen.

The 20-year-old England International has already scored four goals in 67 appearances for the Reds and has won two caps for the national side.

He made his Liverpool debut in a League Cup defeat to Tottenham in 2016 and has since established himself as first-choice right-back for Jurgen Klopp’s men, penning a new five-year deal with the Merseysiders in January.

Alexander-Arnold’s meteoric rise is evident from his recent nomination in the ‘Golden Boy’ award alongside other young starlets such as winner Matthis de Ligt of Ajax and Roma’s Justin Kluivert.

Jones (above left), who also played at right back for the Reds in the 1990s, is now a mentor to youth players at the club’s Kirkby base. He worked with Alexander-Arnold for a number of years prior to his move to Melwood and always knew he had enormous potential.
“I was at The Academy with him from under 16 level,” said Jones. “He had all the great attributes. He can go forward, he can cross a great ball, has good pace and a good engine on him.
“Trent had always been a midfielder, but when he was about 17, we gave him a go at right back against Manchester City. We were struggling for a right back and thought we’d put him there, but nobody had told him about how to play that position. We knew he had great talent, so we worked on him for a while in that position and on his defending.”

Since then Alexander-Arnold has gone from strength to strength, making an impact for both club and country. He made his England bow against Costa Rica last year and was a member of the England squad that reached the World Cup semi finals in Russia.

Jones has been delighted by how the youngster has developed and feels his vision and passing ability means he could yet move into a more central role in the years ahead.
He added: “Everyone’s been working with him for the last couple of years and he’s always going to learn but he’s just come in and he’s becoming unbelievable. He’s going to be one of the best right backs Liverpool or the Premier League’s ever had if he stays in that position.

“But I think there’s a good chance in the next couple of years they might move him into midfield if he matures in the right way, and we could end up with another right back. But from seeing him in his younger days he’s come on so much, and its great to see.”