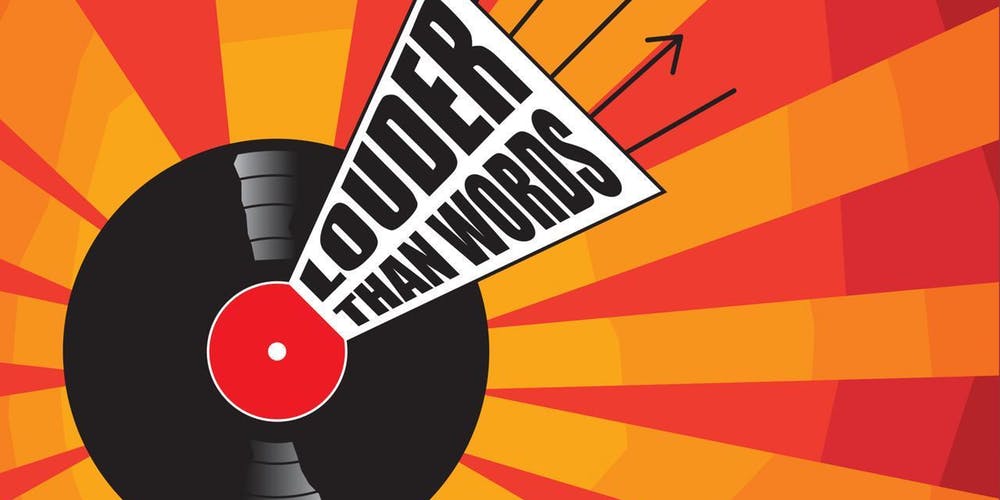 The festival provides students with the opportunity to network with journalists and other music industry professionals while also turning their hand to review writing. These reviews can then be submitted for assessment – a good example of how BA Music Journalism fuses industry practice into curriculum design.

Below are some extracts from work written by BA Music Journalism students from Louder Than Words that formed part of their course:

Jon Paul Berry writes: Louder Than Words is the UK’s biggest music-based literature festival and this year it hosted a varied range of panels, book signings, discussions and workshops. Over the weekend the festival welcomed the likes of Pink Floyd’s bassist Guy Pratt, Chris Difford from Squeeze and many more.

The Principal Hotel opened in 1895 and it’s the type of place you’d expect to bump into celebrities from all industries. The interior of the building is fit for a king with its impressive unique design.

As I was waiting with anticipation for the talk to start, a film starts to play. It’s a slideshow of Morrissey during the late ’80s and ’90s. Morrissey obviously flamboyantly posing for each photo. As a Morrissey fan for as long as I can remember, seeing these private behind-the-curtain style photos of the man I hold in such high regard leaves me glued to the screen.

However, for some reason, the people of 2018 haven’t taken kindly to Morrissey or his opinions. He has been ostracised and labelled a social pariah for having an intelligent opinion. I suppose he’s just another victim of our snowflake society.

The video slideshow lasted for a pleasurable 10 minutes and then Kevin Cummins appeared and was greeted with a round of applause by the packed-out conference room. As soon as Kevin sits down the audience falls silent with their ears at the ready.

Punk musician and music journalist John Robb is looking as sharp as ever with his well looked after Mohawk. The conversation is mostly dominated by Kevin Cummins and his wild stories of Morrissey’s world tours in the early ’90s.

Cummins describes the many ways Morrissey used to be hard to deal with when having his photo taken, how his unconventional attitudes usually lead to a great shot. Morrissey has never been shy about his outlandish narcissism. Cummins tells the audience about how Morrissey used to have the photos taken of him printed on puzzles and mugs for his own use.

Olivia Owen writes: I attended the panel called ‘Writing about music is like Dancing About Architecture’, named after a famous quote. The panellists, consisting of Professor Martin James (Professor of Cultural Industries at Southampton Solent University), Dr. Lucy O’Brien (Author of books such as ‘She Bop’ and ‘Madonna: Like an Icon’), Dr. Simon Morrison (Senior Lecturer in Music Journalism at the University of Chester), John McCready (Writer for numerous music magazines including NME), Georgia Rawson (Editor of music magazine Discovered) and Emma Murphy (University of Chester student), debated whether there is actually any truth to the claim that writing about music is a strenuous, seemingly impossible task.

Before the discussion began, some of the panellists stated why they got into music journalism in the first place. For example, Lucy became interested in the subject as it was a new and exciting area of journalism, emerging in the latter half of the 20th century. She also found that she had the freedom to be creative and invent herself as a writer. Finally, she liked how she could create a platform for more women in music as she was also interested in feminism.

On the other hand, John felt that writing about music was a way of giving something back after a concert. He believes that music journalists have a duty of continuing the creativity seen by artists in a live setting and carrying it over to words. Furthermore, he said that writers should be enthusiastic and hopeful about their work and email magazines to look for opportunities. This is because you have a voice and an opinion which is valued by publications looking for writers.

The entire panel agreed that young writers should be confident about using their voices and students studying music journalism need to recognise that university is a deeper experience than just a learning course. Being in a class with other music fanatics builds a sense of community which revolves around attending gigs and immersing yourself in music in general.

The panel then looked at the issue of how some writers find it hard to be critical in their work. Lucy simply stated, “channel your voice, point out faults and respect writer’s rights”. Music criticism should challenge cultural complacency – writers shouldn’t turn down opportunities as they always allow you to develop in a number of areas personally such as your knowledge, perspectives and specialisms..”

Kathryn Dias also attended the literary festival. She wrote: “But more than anything Louder Than Words is about bringing people together and helping people connect with other people in a fun lighthearted way, even if you’ve never been to the festival itself  just by listening to people talk about it you can sense how important it is and the sense of community it brings to the people.

When Chris Difford attended Louder Than Words it was a warm intimate affair, Difford talked about how he was currently on tour and how it was making him feel like he was in two places at once “I’m a little bit sort of one foot in one camp one foot in the other my heads in the car at the moment it’s heading to Hull.”

After a warm introduction they began to talk about Difford’s book “Some Fantastic Place My Life In And Out Of Squeeze” which was released in 2017.  When asked what prompted him to write the book Difford went on to explain how he was travelling on tour in America and after showing his tour manager what was his diary it was suggested that it should be turned into a book.

Later towards the end of the conversation Difford pulled out an acoustic guitar and played a few songs, starting with the first song squeeze played on Top Of The Pops. The way he interacted with the audience throughout the set gave the performance a casual, warm vibe. It almost felt like you were sat around a campfire. You almost felt like you were closer to him as a person, the way he was so comfortable and open with everyone.