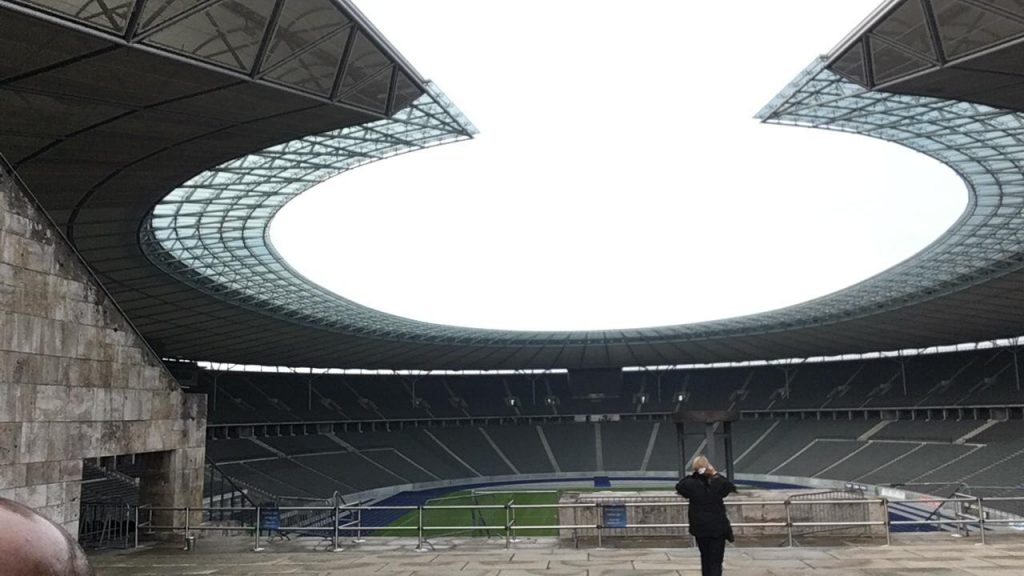 Well, our final day in Berlin arrived and we had two more visits to go on as well as prepare to leave and cram in some last-minute souvenir shopping.

So to say it was anticipated to be a little hectic would be an understatement and the rain that was forecast did not help matters either.

However, in the end things went pretty smoothly. The journey to the Olympic Stadium was straightforward enough and well-worth it for the group of us who ventured to go.

It is difficult to describe it in some ways because perhaps there is an argument that all big stadiums are ultimately the same, huge and spectacular and awesome to say the least. But what was particularly striking about Berlin’s version of the huge stadium was the fact that it looked like something out of a movie – and strangely enough it was – the spectacular (but controversial) film of the infamous Berlin Olympics of 1936.

It was designed to be Adolf Hitler and his National Socialist movement’s opportunity to showcase their ‘New Germany’ to the world. I’m not going to spoil the end of the film but needless to say, the goodies won and the baddies were humiliated. It is well worth watching both as an important historical artefact and the fact that it is actually quite an astonishing feat of film-making.

The point is, the real star of the film is the stadium itself and to encounter it in real-life, so to speak, did feel a little like meeting a major movie character. Considering the stadium is more than 80 years old, it manages to look new and ageless at the same time.

Of course the story behind it is long and complicated, and I am not going to bore you with it now. However, to see the track where the legendary athlete Jessie Owens almost single-handedly debunked a watching Adolf Hitler’s absurd theories about racial superiority was in some ways as powerful a moment as standing in the middle of Sachenhausen or reading the accounts of victims at the Holocaust Memorial.

One man, Owens, in doing what he did best was able to begin to undermine what seemed to be an irresistible force of evil that so many millions were becoming convinced to buy in to. Maybe, just maybe, Jessie Owens, that ordinary man performing extraordinary athletic feats, drew first blood in Hitler’s ultimate downfall.

So when we arrived at our final visit, the Berlin Wall Museum, it was a fitting end to the few days we had enjoyed in Berlin. It’s most recent world-changing event, which I remember watching on the television when I was about the same age as most of the group on our trip, continued the theme that seemed to run so strongly in all the visits that the group had taken part in from the Bundestag to the Bowie tour.

As I mentioned in my previous post, the lessons for those of us involved in m​edia are clear.

Now where did I put that Dunkin’ Donut I managed to smuggle through airport security?