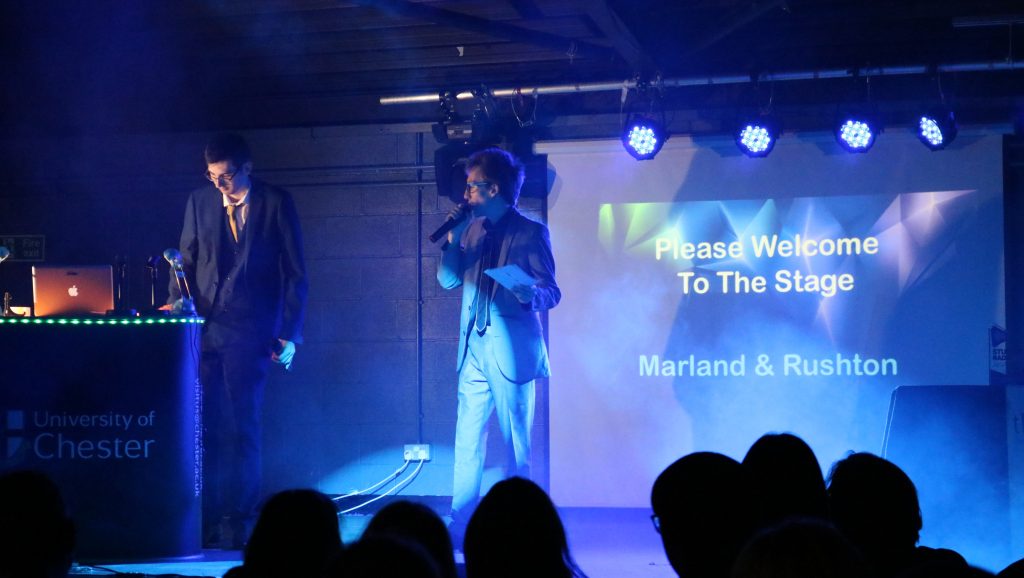 A packed North West Media Centre enjoyed a fantastic evening as the 2019 Cat Awards celebrated the work of students on The Cat Radio.

Each nomination was judged by industry professionals with video feedback on the entries played out on the night.

Student Kris Meredith was delighted to hear feedback from industry professionals and said: “It’s like gold really, they’re the people you want to work for one day. Getting their feedback on what you’ve done at university, if it’s good, that’s great, if it’s not so good, it gives you time to make it better.”

Fellow student Nothando Sigiyo added: “Especially at moments like this, when radio is changing, it’s good to hear from industry, to make it feel worthwhile.”

Max Rushton, interviewed just before co-hosting the awards, was feeling a little nervous: “It’s quite fun to see that flip. Over the last two years we’ve watched everyone else do it now it’s our turn. It is quite daunting.”

Co-host Tom Marland said: “It’s not just the people who are going to win tonight who are going to get feedback. I think that’s quite important because it helps you to build upon your skillset and also just a great way to make contacts – to get your voice and what you do really well out there to people in the industry.”

Added Max: “It’s also just a celebration of the whole year of The Cat Radio. It’s a good social event. It’s not just about the third years setting it up, it’s about the first, second and Master’s years too, it’s for everyone.”

Postgraduate student Lauren Duffy said: “I’m part of the management team, so part of organising the event. It’s such a lovely event to celebrate the hard work that’s been put into radio, for those going into radio, their successes, we have some real talent here. It’s nice to see it showcased and be proud of it.”

And finally, Best Entertainment programme was won by Tom Marland and Max Rushton, a fabulous end to the evening.