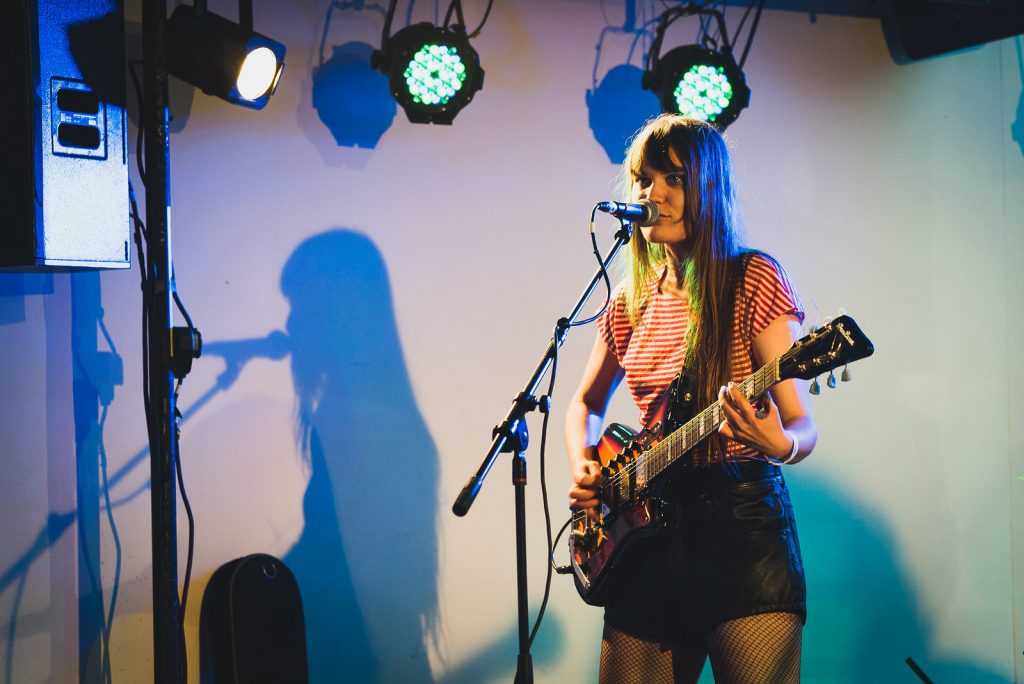 Without further ado, being introduced by the iconic Countdown theme tune, the Manchester based trio enthusiastically skip onto the too-small stage.

Calva Louise open chronological style, playing their first released track, ‘I’m Gonna Do Well’. The track starts off with that sort of sinister, cartoon villainy atmosphere, which switches up to a more chirpy fashion as though the song is a dual narrative of hero and antihero. Which in theory, isn’t a bad thing. Surprisingly it doesn’t make it unfocused or confusing.

Calva Louise couldn’t be described as anything but vibrant leading into their second track, ‘Outrageous’ which is positively rage ridden- rebellious to say the least. Sounding like the Ting Tings on speed.

This same empowered energy is carried through to their next song, and my personal favourite, ‘Tug Of War’. It’s one of those bops that doesn’t feel like it lasts long. You’re so hooked that it feels as though it lasts a second and then it’s over. The Manchester based trio definitely have a knack for creating audio addictions.

The whole gig feels as though it lasts three minutes, rather than the average hour-ish set, performing both songs from their recently released album, Rhinoceros, such as ‘I Heard A Cry’, ‘Wondertale’ and ‘Cruel Girl’. Then there are the exotic renditions of unreleased tracks, ‘Adelante’ and ‘Beliscoso’ sung almost seductively in Spanish – you don’t see that a lot in the Manchester indie scene nowadays – by Jess, who is heart-warmingly humble through the set.

They finish their set with the mind-blowingly mental track and I believe the one this very mixed but moshy crowd has been waiting for – ‘Getting Closer’. Honestly if I go deaf right now, it’s fine, I can deal with it. I wouldn’t have it any other way.

But seriously, Calva Louise are definitely one of the most eccentric acts I’ve seen so far. If you can’t go see them, the least you can do is stream them.

Find out more about The University of Chester’s BA Music Journalism course HERE.