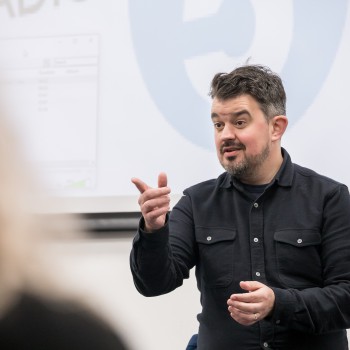 Aspiring radio presenters and podcast makers met with a BBC 5 Live Presenter, BBC Sounds Podcast maker and The One Show reporter this month.

As part of the regular guest session talks at the Warrington Campus, Chris Warburton spoke about his career and what it was like working in the media.

He also gave students advice about how to get noticed in the industry and how to progress, as well as giving University of Chester students a behind-the-scenes perspective on his award winning podcast Beyond Reasonable Doubt.

Michelle Ponting, Programme Leader for Radio Production, said: “The aim of these sessions is to bring learning to life. It’s great for students to learn from those working in the industry, to help them make contacts. I am really grateful that Chris took time out of his busy schedule to attend the session. I could have quizzed him all afternoon!”

Chris is the voice of the End of Days podcast about the 1993 Waco tragedy, in which 76 people died in a siege between the Branch Davidian cult and the FBI in Texas.

Chris discussed the process of researching and interviewing for the podcast, which includes perspectives from survivors, the families of victims, and a someone convicted after the incident. The broadcaster also gave an insight into his new role on The One Show and how different it was to working in radio.

Aside from students, staff also attended the session. Mark Duffett, Reader in the Department of Music, Media and Performance, said: “Chris Warburton is an award-winning, seasoned broadcaster and it was a treat having someone of his calibre to speak to students. As well as providing some fascinating insights into the worlds of radio and podcasting, he offered some very valuable careers advice to students. I hope we can have him back in future.”

Student Madina Wakenge Kinyenya, 23, from Wakefield, said: “I absolutely loved Chris. He was super informative and encouraging. The journo in me was awakened.”

This week, guest speaker Paul Fernley came in from ReelWorld, a high-profile company that does the branding for radio stations worldwide.

Next week, the campus will host advertising guest Louis Georgiou, the founder and managing director of Code Computerlove –  an award winning digital agency based in Manchester.