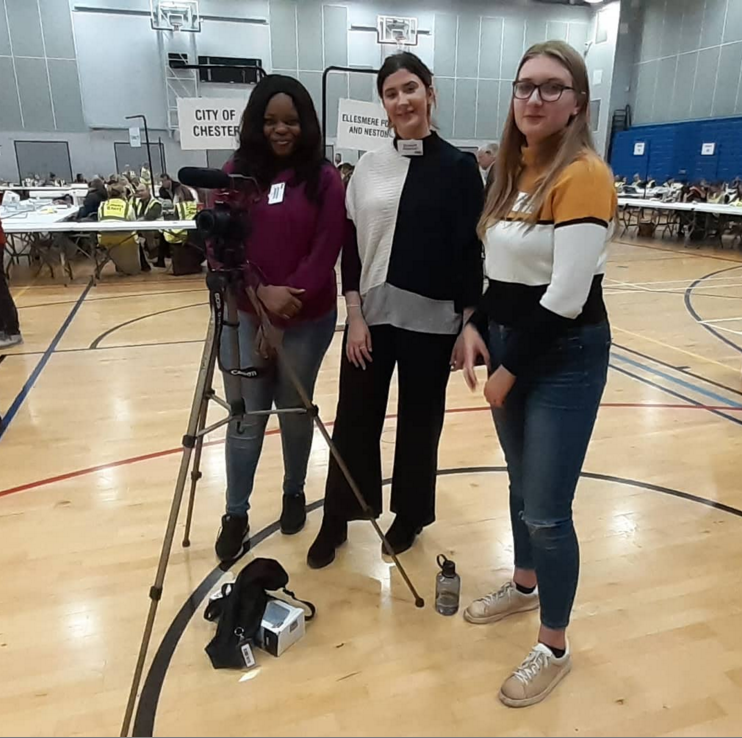 Follow University of Chester students as they cover what could be a historic turning-point for party politics in the UK: the 2019 general election. All visual/audio material produced by students, unless stated otherwise.

8.30pm: The team, including (Alix Booth, second-year BA combined honours Journalism), Lauretta Osubor and Georgia Beech (MA Journalism) arrives at the Sports Village on Stanney Lane in Ellesmere Port in good spirits. We will meet Angela Ferguson, also an MA Journalism student, there, as she is gathering actuality and images for Dee Radio.

We’ve kitted up with camera and audio-recording equipment and we’ve also brought snacks and cushions. It might be a long night.

We decamp to the balcony to watch the count being set up. It will be about two hours before the first ballot boxes arrive as the polls close at 10, but it’s already a tense and busy atmosphere.

9.30pm: The tables are filling up with the people who will carry out the count. Clad in hi-vis jackets, there job will be to collate votes into bundles of 10 while officials and representatives from the Green, Conservative, Brexit, Liberal Democrat and Labour parties observe proceedings.

We record a briefing with acting returning officer Andrew Lewis, who is overseeing both counts, as well as those in the East of the county. Listen about what it takes to organise a count here:

10pm: Campaigners and several candidates start to gather in the hall (They will observe the unsealing of the ballot boxes when they arrive.

10.15pm: The first ballot boxes are rushed in, unsealed and then distributed to counters. The team decamps to the media room to watch the results roll in across the country.

10.30pm onward: team members take it in turn to interview candidates and campaigners on the count floor. The mood is muted but intense, particularly among the Labour camp, following the exit poll results. Chris Matheson is fighting to retain his seat with the benefit of a large majority from the last election, but its clear the party is slated to lose seats elsewhere (a predicted 51 gain for Cons, 71 loss for Lab). Conversely, Suzanne George for the Conservatives faces the opposite situation; gaining the Chester seat will be an uphill battle, but the Conservatives are predicted to seize previous Labour heartland constituencies. In the end, the result could come down to a number of factors, both national (Brexit, the future of the NHS), party-political and regional (local knowledge, the popularity of individual candidates and the effectiveness of their canvassing).

Audio: CLICK HERE TO FIND OUT WHAT CAMPAIGNERS AND CANDIDATES BELIEVE ARE THE BIGGEST ISSUES FOR CHESTER VOTERS

11.30pm: Newcastle declares for Labour. This constituency battles it out with Sunderland to be the first to announce its new MP. Typically, it will be a long wait until the majority of constituencies – including Chester City and Ellesmere Port and Neston – declare.

“It’s not boring though,” says Alix, between interviews. “I haven’t had much sleep, but the atmosphere keeps you going.”

“I didn’t sleep much either,” says Georgia. “I was lying awake last night thinking about the result.”

Audio: FIND OUT WHAT IT’S LIKE TO CAMPAIGN WHEN YOU KNOW YOU PROBABLY WON’T WIN A SEAT

MIDNIGHT: both counts have been verified and the turnouts confirmed.

CLICK HERE TO SEE HOW THE TURNOUT STACKS UP HISTORICALLY

1am: Students have secured interviews from Chris Matheson (Labour), Bob Thompson (Liberal Democrats), Nicholas Brown (Greens) and Andy Argyle (Brexit Party), plus vox pops from campaigners and supporters from all parties, including the Conservatives. Now busy in the media room uploading sound files and pictures to the media hub. All reporters, including the student reporters, seem to be running on Haribo.

We ask a council official what’s keeping them going. “Adrenaline”, he replies.

Students back on Parkgate Campus in Chester are collating the information and editing sound and images for the website. Meanwhile, The Cat Radio is broadcasting through the night, with students Joe Yates and Corey Townley at the helm. They’re in for the long haul, too: Joe has pledged to stay until the final results come in. They’ll join us for a live-link when the Chester result is called.

2.30am: ((Retrospective update – 4pm following day)) Things have settled into a waiting game, but suddenly there’s an upset. Someone has been taken seriously ill in the hall. Screens go up to protect their privacy and all but essential officers evacuate the room. An ambulance arrives.

The team, including Angela, who has considerable previous journalistic experience, has a quick discussion about media ethics. Is it right to live Tweet and Instagram about this, when the news might breach someone’s medical privacy? Potentially, as the individual is anonymous, this could also cause unnecessary worry to the hundreds of family members waiting to hear from staff working at the count. We agree that we do not want to break the news immediately to give the authorities time to contact the family of the affected person. Other practicing journalists, however, choose to live tweet the incident.

3am (approx): Good news: the acting returning officer informs the waiting crowd that the affected person has successfully been taken to hospital and is “breathing independently”. The count continues.

Shortly before 4am: the results for Chester City are in. Chris Matheson has retained his seat at 6,000 votes ahead of Samantha George (Con), securing his position as MP for a third time. Alix Booth captures the moment:

Despite this local victory, national results for Labour look grim. Mr Matheson acknowledges this in his address.

It’s time to pack up. The count team hand over to The Cat Radio where the presenters are still going strong.

Update: at 5.30am, after a partial re-count, it emerges that Justin Madders has retained his seat as Labour MP for Ellesmere Port and Neston.

The count team is now back in Chester and ready for a well-earned rest. Whatever the overall result, it’s clear there will be plenty of political material for students to write, film and Tweet over the coming months.