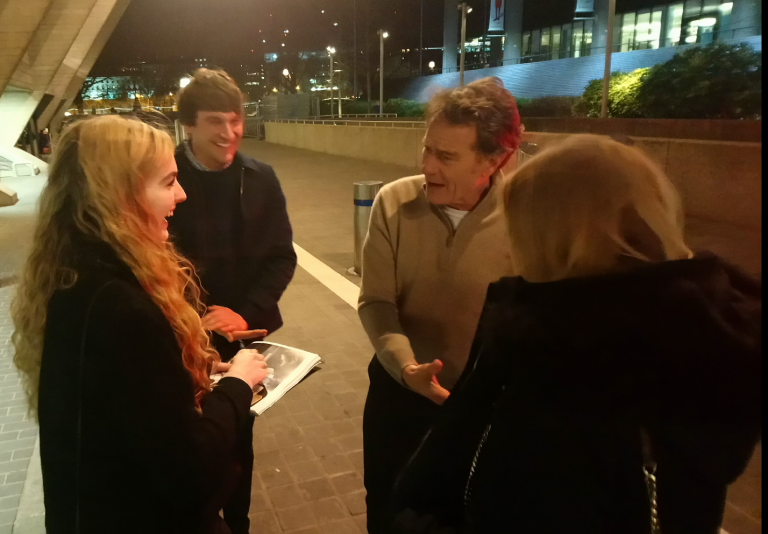 Currently, Mr Cranston, 61, plays desperate journalist and anchorman Howard Beale who ups the ratings on his show by threatening to kill himself on air.

The play, now on at the London Theatre, has received solid reviews from newspapers such as the Telegraph and the Guardian.

Annabel: What was it that first interested you in the show?
Bryan: Well I think it’s a great story in the sense that it focuses on the bombardment of information that we have in this generation and it’s the question of is it really journalism or is it what they are manipulating us to think, you know?

Annabel: What is it like performing on the stage every night?
Bryan: Oh it’s very exciting. Very exhausting too,  like , it takes a lot of energy which I don’t necessarily have as much now as I used to. But I do sleep very well at night, at least.

Annabel: Have you had time to watch any other theatre performances while in London?
Bryan: I haven’t actually. I’ve been pretty busy so I haven’t had the chance to do that but I would love to eventually. London is such a great city and I feel I need to take advantage while I’m here.

Annabel: Do you have any advise for people who are wanting to start acting?
Bryan: My number one tip is to be prepared for people to say “nah, I don’t like this guy”.

It’s like a relationship you have to be absolutely invested in it. If it’s something you really love and really want you don’t let the negative views stop you from doing it.

You don’t want to get your head filled with opinions of other people. Just keep reaching keep working and you will get there you will succeed.