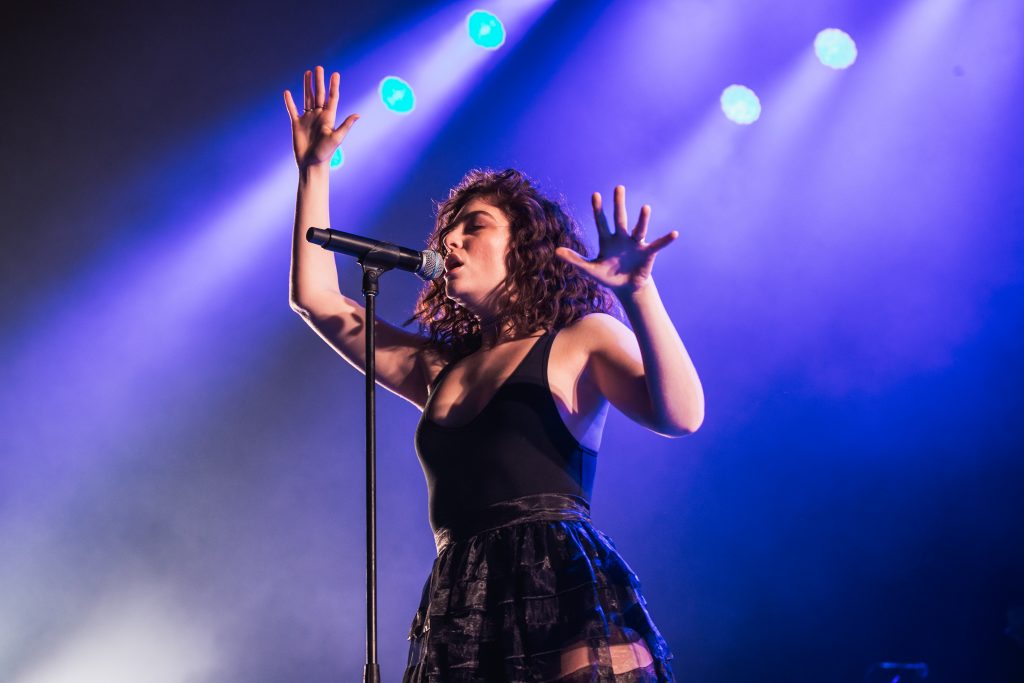 3,500 Mancunians were there, waiting for the clock to strike nine, and for our Lorde and Saviour to grace the opening night of her highly-anticipated Melodrama World Tour.

Ella Yelich-O’Connor is known better as Lorde, a New Zealand-bred artist with a stage name devoted to her fascination with “royals and aristocracy”. She first burst into the realm in 2013, with the two-fold Grammy-winning smash hit ‘Royals’. Around this time, David Bowie saw a 16-year-old Lorde perform, and branded her “the future of music”. I could just stop the review there. When Major Tom thinks you’re the don, you don’t need a mere mortal’s approval.

Hot off the heels of her critically-lauded second album ‘Melodrama’, her “loose concept album” of one night at a house party, the now-aged-20 Lorde was about to ascend. Moments before her entrance, the PA blasted the 1985 Kate Bush classic “Running Up that Hill”, a nod to one of Lorde’s predominant musical influences; Bush being another teenage maverick who blew people away in 1978 with her unconventional lyric matter, melodies and operatic vocals.

The lights went down, and a television set burst to life on stage right, giving us a perfect mise-en-scène of that dreaded monotonous clicking through late-night channels, slumped alone post-party on some geezer’s sofa, clutching a share bag of crisps in one hand, and a glass of wine in the other with two different lipstick stains around the rim.

The scene was set, then there she was, back on stage, no signs of opening night nerves. Stood beneath a ten-foot neon-pink ‘MELODRAMA’ sign, there to “celebrate her pettiness, mood swings, and flights of fancy”, Lorde opened the show with her Disclosure collaboration ‘Magnets’. The Manchester crowd lost their shit when she followed this with ‘Tennis Court’, an already-classic cut from her debut album.

Lorde smashed through tracks both old and new, with each opening line being embraced by the ardent audience. Initially wary of her live vocal ability, I was proved wrong with her spectacularly passionate and raspy performance; certainly an improvement from some of her shakier performances from yesteryear.

Lorde’s often-criticised dancing was also present, taking on a guise of Ian Curtis’ infamous shapes from the late 1970s. The night took a turn when she perched for a chat, the soft melody of ‘Liability’ looping behind her, like a piano man tinkering away at last orders.

The mystique was gone, and she was now Ella, your mate.

“It feels like I’ve been meaning to come here for a long time,” she confessed, “I grew up on Coronation Street”. Referencing the Manchester Arena bombing in May, she wore her heart on her sleeve, apologising on behalf of “the artists who stand up here and try to fill your evening with love”. There wasn’t a dry eye in the room, and the river of tears grew deeper with a chillingly perfect cover of Phil Collins’ “In the Air Tonight”, complete with crashing percussion and strobe lights.

The evening finished on a high with a performance of her signature hit ‘Royals’, and the monster-hit-that-got-away ‘Green Light’. In her encore track ‘Perfect Places’, Lorde was “nineteen and on fire”, and asked “What the fuck are perfect places anyway?” In that moment, we were all there — nineteen, on fire and in our perfect place.