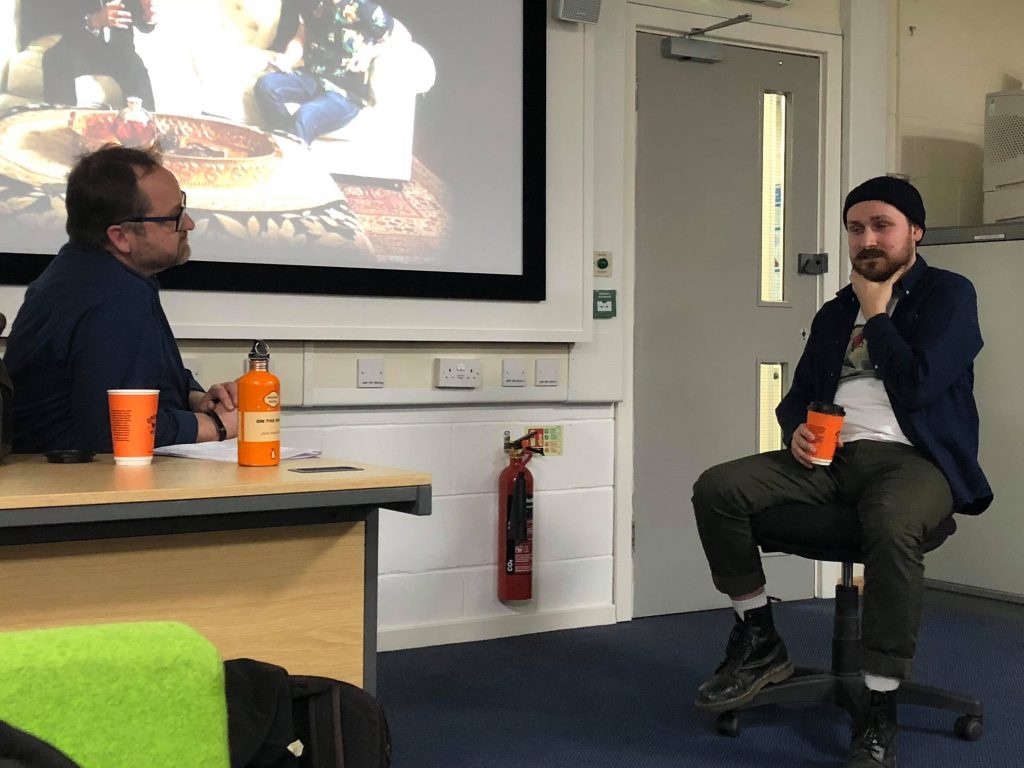 Since leaving the University of Chester, BA Journalism graduate John Longbottom has landed exciting roles including News and Online Editor of ‘Kerrang!’ and Star Wars Social Media Content Creator. John recently returned to Parkgate Campus to talk to current students about making it in ‘the real world’.  Music Journalism student Georgia Jackson was there…

Looking at the most successful students to come from the University of Chester, journalism graduate John Longbottom is certainly one of the most admirable. Longbottom has built a successful career for himself in the fields of journalism and creating social media content. On Wednesday, he returned to his alma mater to talk to budding journalists about how he climbed the occupational ladder.

“It’s important for students to hear from people who’ve been where they are”, says Simon Morrison, Music Journalism programme leader.

“It’s reassuring. Lecturers can tell you all the stuff [about the field] in the world, but what really helps is first-hand advice from those in the thick of it”.

And the thick of it is definitely somewhere John resides.

Originally from Yorkshire, Longbottom began his Journalism degree at the University of Chester in 2006.

John stresses how “fully” he got stuck into student life, but also worked at his passions and goals.

“At uni, I would write as much as I could and offered to make posters for bands,” says John.

After graduating with a dissertation discussing the print/digital media shift in newspapers and not a single late assignment submission – “deadlines are the essence of journalism”  John stresses – he moved to London, hoodwinked his way into magazine offices to hand over his CV while working in a shoe shop, and eventually became a freelance writer for publications like Rock Sound and Mojo.

Eventually, his persistence and portfolio building paid off, and he was soon working in his dream job – writing for Kerrang! Magazine. As he worked for the magazine, though, John noticed an area in which Kerrang’s competition were pulling away – the online side of the business.

Kerrang! were largely focused on the print magazine, and hadn’t updated their website in years.

“Years is a long time when it comes to the internet. It was getting embarrassing that everyone else was making headway with an online presence and we weren’t,” says John.

He began pressing his superiors to address the problem, ultimately leading to his role as Kerrang!’s first ever Online Editor.

Shifts in staff at Kerrang! and slowly building a good reputation soon allowed Longbottom to progress even further.

Adds John: “I was bumped up to News Editor, that’s when I started getting the really good opportunities.”

His time as Kerrang! News Editor included some real starstruck moments, including being flown to Los Angeles to interview Ozzy Osbourne in his ‘mental’ Beverly Hills mansion.

“Another time, a PR emailed me asking if I wanted to go for a pint with Dave Grohl. I ignored it because I thought it couldn’t possibly have been real! Thankfully, the PR got back in touch and a couple of days later I was drinking in Soho with Dave Grohl himself.” 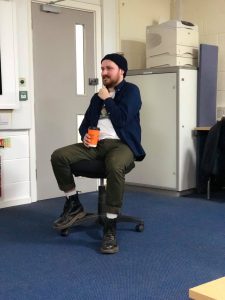 Soon enough, Longbottom wasn’t just an online editor – he was an award-winning online editor. The reputation he had carefully constructed had travelled, and he found himself being headhunted to head up social media for Star Wars (and later James Bond, Harry Potter and Marvel), a job he absolutely jumped at the chance for.

“Just before Christmas I live-tweeted the entire press event for The Last Jedi. It felt like the entire thing was over in 10 minutes,” he recalls.

Thinking about the sheer scale of the task Longbottom does for work every day in terms of the amount of people he has to reach is bound to sound daunting for many. How exactly does he manage it?

“Sometimes, the best thing you can do is put out a really funny, silly gif,” he smiles.

That response alone points at the huge difference in how today’s young people and older generations, who watched the original Star Wars trilogy, communicate. The social media communication seems to be aimed more at the former.

He agrees. “It’s nice to introduce new people to something as beloved as Star Wars.”

It’s clear with everything he says, that John is a talented individual with a clear sense of self when it comes to his work.

“I do work in marketing, but what makes me different is I come at everything from an editorial point-of-view.”

It’s this attitude, and the fact that he sees something he can use in his current job from every aspect of his career, that allowed him to pilot Star Wars’ collaboration with Drop Dead (the clothing line of Oli Sykes, frontman of Bring Me The Horizon), as well as help his friends’ music-based brewery to collaborate with bands.

Even on top of running the social media accounts of the biggest franchises in the world, John still finds the time to write.

“The guys at Vice emailed me asking if I wanted to do the ‘Greggs Diet’ for a week because no one else wanted to. It was a fun thing to do because it was so silly, but it was in summer. Everyone was having amazing barbecues, so towards the end of the week my steak bakes didn’t look so good anymore.”

The finished piece was a hit, and it seems to have become the accolade John is most well-known for.

“I’ve written really serious pieces about [Sum 41 frontman] Deryck Whibley’s near-death experience because of alcoholism, and the only emails I get saying ‘I loved that’ are about the Greggs piece.”

He’s jolly as he says this, and underneath his quiet confidence, seems to have an air of someone who still can’t quite believe his luck.

Following working his way up to such a successful career, what advice does John have for those desperate to enter the field?

“There’s no set path to this industry, and I definitely winged it. But once you’re in it, you need to build up a reputation.”

As well as being a trustworthy person (being open to anything and meeting deadlines), you have to be likeable too, he says. Judging by his stories of applying for countless roles and not hearing back for months, and couch-surfing as a broke, ambitious soul who had just moved to London, resilience is key too.

“The nicest thing anyone’s ever done for me was when my manager [at his old shoe shop job] told me not to apply for a managerial position that had opened up, because he knew it wasn’t what I wanted to do,” he fondly remembers.

It’s this anecdote that most sums up the pursuit of a job in journalism. As John said, there is no clear route into the profession, but trying is the only way you will get there.