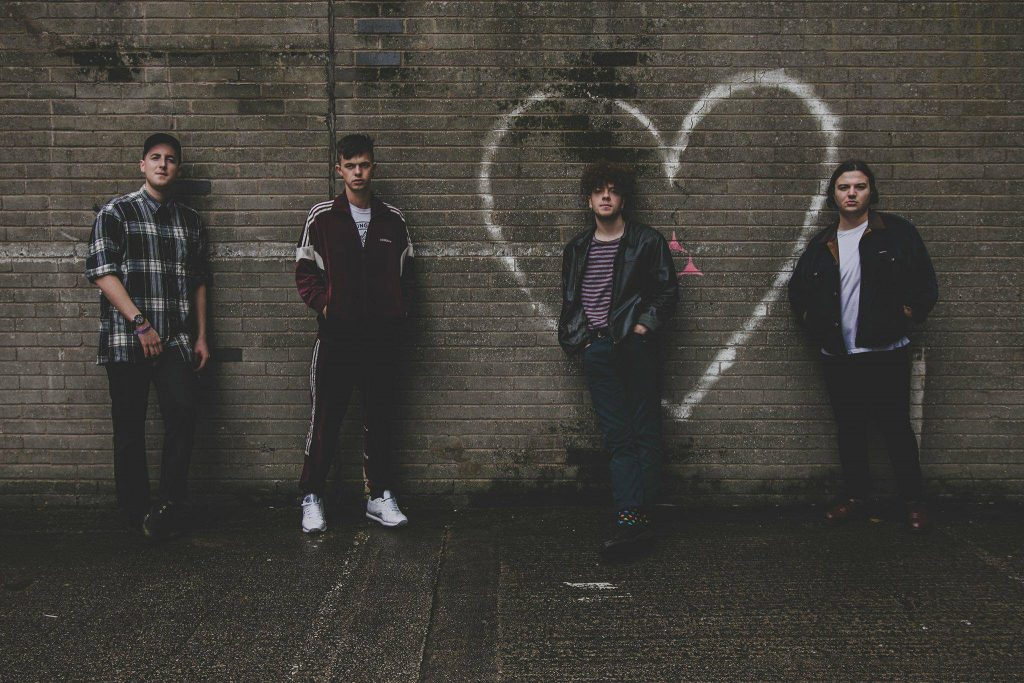 First year Music Journalism student Frank Whitwell generated an EP review for No Hot Ashes debut EP ‘Skint Kids Disco’. Frank also analyses one of their live shows before sitting down with the band to discuss their new release and what the future holds.

My immediate reaction to the EP was slight disappointment due to the fact that it only featured one song that was unreleased prior to the release of the EP. I was hoping for more new material to be on such an important EP.

‘Skint Kids Disco’ is already an instant classic for the band however, being one of their most danceable tunes.

It is unsurprising that this seems to be their opener for live gigs, a proper crowd hyping anthem.

The riff is reminiscent of MGMT with the funky rhythm guitar and bass bouncing along beneath carrying the melody, ‘Skint Kids Disco’ is already a fan favourite.

‘Eight Till Late’ talks about the struggle of teenage life, growing up and getting pissed as a result, with very relatable lyrics for the youth listening to these songs.

The song has a strong build swelling to a powerful chorus full of energy, with chanting lyrics and a hard-hitting drum beat bringing the song alive before descending back into the relaxed verse.

The song ends with a stand-alone guitar riff reminiscent of early 2000’s pop punk, before the rest of the band come back in with a bang and play out the song on a high.

‘Bad Crowd’ is modern funk rock at its best, this is what would happen if Nile Rogers and Chic grew up in Stockport.

The horns in the song show positive musical progression for the band and is a great inclusion on a very strong track.

Overall ‘Skint Kids Disco’ is a very solid debut EP for the band, despite only having one new song, the future looks very bright for No Hot Ashes.

A sold out Manchester Academy 2 waits eagerly for hometown heroes No Hot Ashes to emerge from the back onto the stage.

This sold out venue is the biggest crowd No Hot Ashes has ever performed in front of. Some nerves are evident when the band come out but they still look the part.

They are all dressed in different yellow jackets, looking like a roughed up boyband. Although the nerves are clear there’s a subtle confidence and swagger in their manner, as if they just know that what they’re about to do will be spectacular.

Three of the members are already on stage playing the intro to the opening song, then out comes singer Isaac Taylor to a thunderous reaction from the faithful crowd.

The entire audience knows the words to every song and a large majority are wearing band merch. There’s a very intimate feeling between the band and the audience on this night.

With the release of their first EP the night prior and this being their biggest gig to date, there is an atmosphere of celebration amongst friends, like the gig is a massive party.

New songs ‘Skint Kids Disco’, ‘Bad Crowd’ and ‘Eight Till Late’ were very well received by the loyal fans, who were already able to recite the lyrics just hours after the release of the EP.

The energy in the room was electric as the band blasted out tune after tune, seemingly having the time of their lives doing so.

The band told me in an interview that they believe a test of a band’s integrity is their live performance, and they have definitely proven themselves as a live act here.

Exciting times are ahead for No Hot Ashes. Remember the name.

Your video for the song Skint Kids Disco came out last month, what was the process of making a music video like?

“Skint Kids Disco” was the first serious music video we have ever done to be honest. It was a really fun process from start to finish. We were on a small budget and a small time-scale so we think the end product was amazing and really gets across the vibe of the single, although very simple we wanted to make an “in your face”, eye-catching video that would get people’s attention and just get across that live show feel.

How important is it for you to represent the town you come from and to put Stockport on the map?

Very important. Not many people have heard of Stockport but in recent years a lot more people have taken notice with the rise of Blossoms and we feel we are also chipping in to that from a different musical direction. Our biggest fan-base is in Stockport and Manchester so we always make sure we appreciate the local fans who are supporting our band. A lot of the younger fans went to the same schools as we did so it’s pretty mad when they speak to you.

You’re booked for several festivals this summer, what has been your favourite festival to perform at so far, and what do you think is the main difference between performing at a festival and your own gig?

Festival season is our favourite time of the year and along with the few we have already been booked for we hope to play more festivals around the UK than ever this year. We see festival season as a key opportunity to win over new fans and we see it as a nice challenge. Our personal favourite festival memories to date have been at YNOT Festival in Derbyshire which is no too far away from Stockport. We always get amazing crowds there with it being so local.

You’ve recently been signed to the 13 Artists international booking agency, what does this mean for the future of the band?

We have! It’s been an exciting couple of months watching the relationship progress. 13 Artists are an amazing outfit with a very talented roster of bands ranging from some of our favourite bands Peace, Interpol to industry giants like Arctic Monkeys, Stone Roses… this list goes on so we are excited to be working with them and even though it’s still early days we plan on working incredibly hard with them to push NHA as far as we can.

Your debut EP ‘Skint Kids Disco EP’ is set to release on March 30th, the day before your biggest ever gig at the Manchester Academy 2 on the 31st, when do you think an album can be expected or is that not being talked about just yet?

We are all very excited for the 30th & 31st we couldn’t have asked for a better response to the EP tracks so far and to top that off with a huge Manchester show will be incredible. In terms of the debut album we still feel it’s a little early but it’s definitely not being left out of discussions recently. We are always working 6-12 months ahead of ourselves so we’ll know when the time is right. As a musician the thought of releasing your debut album is a scary yet exciting prospect but also a feeling of vulnerability. Nobody wants their debut album to come out too early and flop so we want to be 100% confident of everything we are doing before we release it. As mentioned we have sold out our biggest headline show to date in Manchester with over 950 tickets sold with just over two months of being on sale. We’d love to be replicating at least half of that capacity if not all of it in all the major UK cities and then drop an album.