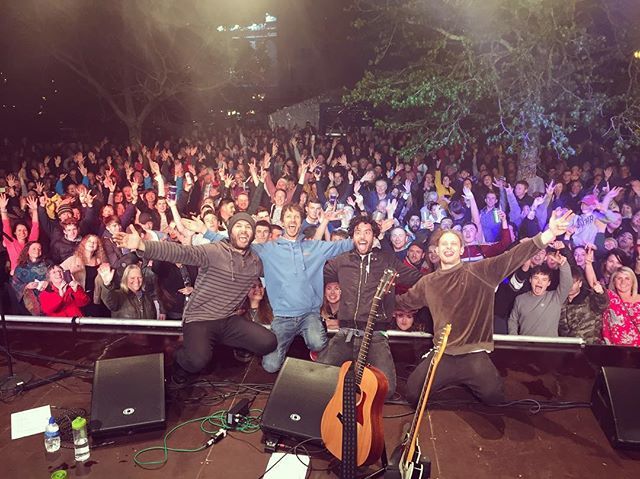 The Undercover Hippy has returned to the music scene with his newest album ‘Truth & Fiction’, this is our chance to get up to date with Billy Rowan’s political and social views and hear how he puts them into a cocktail, mixing them with his usual style of reggae, rap and raw emotion.

The album opens with the track ‘Rise & Fall’ and if you somehow forgot what The Undercover Hippy is all about, then you’ve sure been reminded now.

Billy Rowan is most definitely not afraid to remind us how political he is, and how strongly he feels about current issues.

His lyrics alone would work perfectly for a protest, but back that with extremely irresistible dance vibes, and you’ve got The Undercover Hippy at his best.

There are no blurred lines when listening to this album, just a musician making the most of the power of music.

An album which talks all about doubting the truth and what you are made to believe, with lyrics such as “I don’t know what to believe no more/ when the truth becomes the fiction and the fiction is all.”

Tracks 5 (Mate Like That) and 7 (Bristol Peeps) are a break from the heavily political blueprint, but don’t let that distract you from the phenomenal keyboard solos, witty lyrics and loose guitars, keeping your feet moving and hips shaking.

From start to finish, this album does not fail to disappoint. Every track is as strong as the next, finishing with what has to be my personal favourite, ‘So Undercover’.

This attention grabbing album will have a hold on you as soon as it starts, and it won’t let go just because the album has finished. You’ll be playing it on loop for a while!

Filled with infectious reggae beats, quick fire lyrics and political messages, this is a movement with a cause which is magnified when displayed at live shows, and that definitely did not disappoint in the city of Chester tonight.

The venue is a very relaxed, casual setting which suits the occasion perfectly.

Everyone sinks a few pints with the ‘good vibe’ pre-gig music playing in the background.

Billy Rowan walks around meeting fans and is more than happy to get a few photos.

With show time approaching, the venue soon fills up, the crowd get rowdier as the excitement builds, the music cuts and the light escapes from the room.

The band emerge from the left side of the stage to be greeted by a flattering raw, they take their positions, and the night begins.

“How we doing Chester? Let’s Go!” They begin their set with the new album opener ‘Rise & Fall’ which instantly reveals the intensity in the crowd, not a single person in the building failed to break into a dancing frenzy, every bit of energy was being left in this room tonight.

From the group of teens at the foot of the stage passionately pumping their arms and shaking their hips, to the bouncers on the doors with a subtle foot shuffle, the room is filled with electricity, even the walls are sweating!

By the end of the night, the room has become a family and the band are at the centre of it, they finish their set with the classic and very appropriate ‘Last Chance To Dance’, everyone loses their shit before a routine ‘end of night photo’.

With The Undercover Hippy starting his solo tour this month, I managed to catch a few minutes with the man himself to find out everything from his most recent album ‘Truth & Fiction’ to where it all began for Billy Rowan.

Your newest album ‘Truth & Fiction’ came out almost a year ago now, so now that you have had time to reflect on your work, how happy are you with this record?

It’s a funny story that, because if we were to go back exactly 12 months ago today, I’m pretty sure I only had five songs written for what was meant to be a 10-track album! In a way though, that worked in my favour as it meant that all the songs written were very topical and relevant as I was writing and recording tracks right up to the final week of mixing. Looking back, I am very proud of the album!

Where did the name for the album come from?

Originally, the album was going to be named ‘Rise & Fall’ as well as the opening track, but that was back in 2016 where everything seemed okay, but then everything changed, from Brexit to Trump, and I feel that those issues that were occurring at the time had quite an influence on this album, I felt that ‘Truth & Fiction’ was a little more appropriate to what was going on at the time.

What is your favourite track on the album?

See, that’s a tough one, because if you asked the same question a few weeks ago, then asked me again in a few weeks’ time, I’m sure both answers would be different to the one I give now. My favourite song always changes, at first, I think ‘Truth & Fiction’ was my favourite, I really like the hip-hop styled delivery of the lyrics, it reminds me of early Eminem!

I think it’s probably fair to say that you’ve released your fair share of political music, was this always on the blueprint from the off?

I’ve always been a political individual but picking up a guitar just seems to go hand in hand with that. It’s my outlet, it’s the way I voice my opinions but getting people to dance at the same time!

Do you feel that music needs more political music?

Definitely! I don’t think there could ever be too much political music. Music is the most amazing medium when it comes to spreading ideas. It seems to mix both social and political boundaries in a way that other media sources are unable to do.

What are your biggest musical influences?

I wish I could give an easy, straight answer to that, but the truth is, I’m influenced by every bit of music I listen to, and I feel that’s true for a lot of people. I was influenced heavily by rap which I think is clear in my music, Eminem was definitely a big influence on me during my early twenties, I listened to a lot of reggae as a kid and still do now.

Speaking of influences and you saying how everything has influenced you a little, let’s talk about your history within the music industry, you used to be a Drum and Bass DJ and MC right?

Yeah, I used to do that for quite a long time actually, that’s where I started writing lots of lyrics, I used to just spit the lyrics over drum and base songs, and that definitely had a big influence on my style of music.

How does this solo tour you’re doing at the moment compare to touring with the band?

They’re very different but I love doing them both! I love playing with a band as it allows us to create a lot more energy within the music. Saying that though, I do love the occasional solo tour, they feel a lot more intimate and it gives me that chance to play material that doesn’t fit in the full band set.

One thought on “ALBUM REVIEW: ‘Truth & Fiction’- The Undercover Hippy”