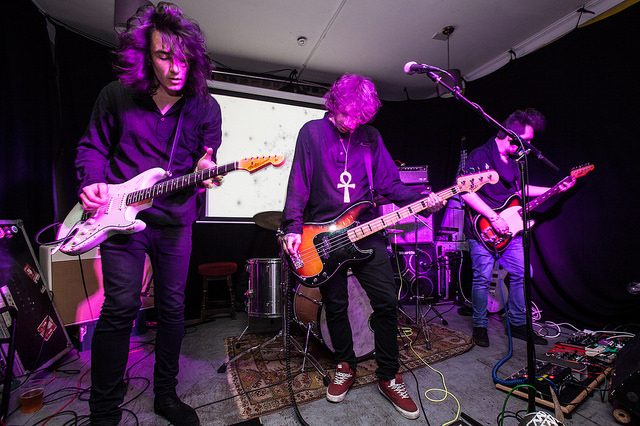 Music Journalism students hit the road to review Baba Naga’s gig at Manchester’s Night and Day Café as part of course assessment; a live exercise that helps students hone their journalistic skills. Below are two reviews from the gig.

“Baba Naga can only be described as the soundtrack to a nightmare or a day trip to hell.”

Manchester’s Night and Day Café is celebrating its 27th birthday tonight with the ever so trippy Baba Naga taking the headline slot.

Out of all the venues in Manchester, The Night and Day has always been one of my favourites. Opened in 1991 by the long-haired Dutchman Jan Oldenburg, Night and Day is a prominent venue in Manchester’s Northern Quarter. With its Amsterdam like attributes, the bar definitely gives you a sense of retro hippy bohemia. A perfect venue for an act like Baba Naga.

In front of a swirly tie-dye green screen, three men conservatively climb on to the stage. Without introduction, they begin. All of a sudden, the room becomes transfixed on the music. You can feel the music in every corner of the building.

Baba Naga can only be described as the soundtrack to a nightmare or a day trip to hell. Trippy psychedelic rock mixed with the howling of demons.

As I stood right near the front of the stage, I could already feel my head being blown off my shoulders and by this point, my ears had already melted.

The three-piece are quite impressive. The music is strong, loud and really rocking the venue. Baba Naga are coming across as a real professional band.

The three support acts that came before them certainly didn’t live up to expectations, so much so they’re not even worth writing about. There’s only one good band in the venue tonight and it’s Baba Naga, and I don’t even like psychedelic music.

The venue is now full and a lot of the crowd either really like the music or they’re off their heads on something. Night and Day is a really cool bar, I understand that but everyone here either wants to be, thinks they are or, indeed, are something. A cesspool of pretentious hippies and millennials.

The three band members look like mannequins, just subtly playing their instruments like no one is here. They should at least try and get into it, I’ve paid to see this. The vacuous and dead to the world guitarist plays his guitar like a robot like he’s been programmed by the devil himself. What they lack in stage presence they definitely make up for in their musical ability.

The one band member that’s really interesting me is the skinny long-haired lead singer/bassist. We’re 30 minutes into the gig and I still haven’t seen his face. Get a haircut! His voice reverberates to the max and it almost sounds like the howling of a wolf.

I’m partly intrigued and partly bored by watching Baba Naga. All the songs sound the same, especially when they don’t give the songs an introduction. It’s just one continuous wave of heavy psychedelic rock. My brain is now juice and my ears are begging me to leave, as good as the band is, it’s just far too loud. Baba Naga’s music may as well be a one long weird psychedelic song.

There is something quite special about Manchester’s music scene, from indie rock and roll to ambient drone music, there are not really a lot of sounds that are not heard in Manchester. Especially Manchester’s Northern Quarter which is where the journey starts.

After a glass of red with fellow peer we arrived at the Northern Quarters Night and Day Café, slap bang within its bohemian crevices. I could already feel that vibe of dangerousness, the feeling you get when being in attendance at an underground rock gig.

I waited patiently with my pint of lager for the first band to come on, The Fruit Tones. Bass kicks in immediately like a brick wall, a mash up of hippie, punky style rock and roll, with very comical skater style vocals from the lead singer/guitarist in his Hawaiian, open buttoned shirt which was probably three sizes too big for him.

The three-piece filled the shoes of a five piece with every corner of the room being filled with 60s style feel good punk.

The guitar was completely clean with no effects added to it, which made the sound raw and added the punk feel to it, and to go along with the guitar the band sported the super echo on the vocals which made the gig sound like a sort of street protest, fitting with the hippie punk genre.

After a few more pints and a couple of chats with my course peers, the next band was due on, and after seeing the Fruit Tones, the heat was on for Mister Strange. A five piece band, slightly heavier music with a lot more hair on their heads. And to be quite honest, I wish I had more hair on my head so that I could have tucked it all into my ear drums.

The music was too fast to keep up with, and the biggest screw-up was the singer’s request to turn his vocal delay and reverb up to eleven. Even the singer’s friends were slating his integration with the band saying that it was a disappointment. I ask them for their names so that I could quote them on it, they respond with ‘no’, understandable.

At this point I am spending most of the time at the bar waiting for the headline act Baba Naga. Ten o’clock comes and Baba Naga are due on, after reading a couple of reviews I was anxious.

Baba Naga stole the evening with their combination of intricate wisdom tunes mixed with trippy visuals being projected on the brickwork behind them. They have picked up where the 60s left off with their LSD laced sitar pieces.

The band kept me away from the bar for the whole hour. That’s impressive. The band sound somewhere between Tame Impala and the White Stripes in relation to guitar solos but trippy verse layers.