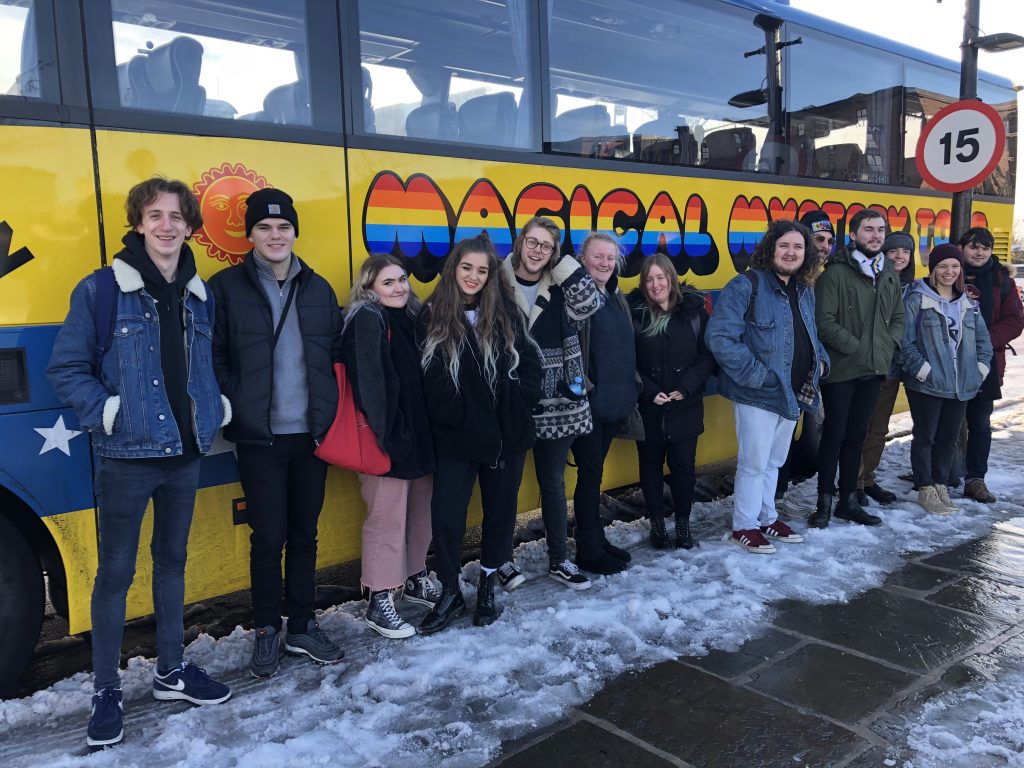 Roll up! Roll up! For the Magical Mystery Tour! Picture yourself, in a coach, on a dock, a trip down memory…Penny Lane, a quick stop at Strawberry Fields, and a visit at each of the Fab Four’s childhood homes. RHYS THOMAS reflects on BA Music Journalism’s day trip to the home of The Beatles.

A very cold day in Liverpool with snow masking the floor made ‘Here Comes the Sun’ the most ironic track of the day, but ‘Ticket to Ride’ was most definitely fitting.

The Day starts at Albert Dock, with the ominous fluorescent bus with “MAGICAL MYSTERY TOUR” boldly painted on the side with the psychedelic rainbow pallet of colours splattered in the background. The only disappointment at this stage, is that the tour guide isn’t dressed as walrus.

Speaking of the tour guide, Jay. He starts the day off by declaring “when in Liverpool, you’re never far away from a musician, or a relative of one, and I am the baby brother of the lead signer from Frankie Goes to Hollywood” …even if the maths didn’t seem to quite add up. 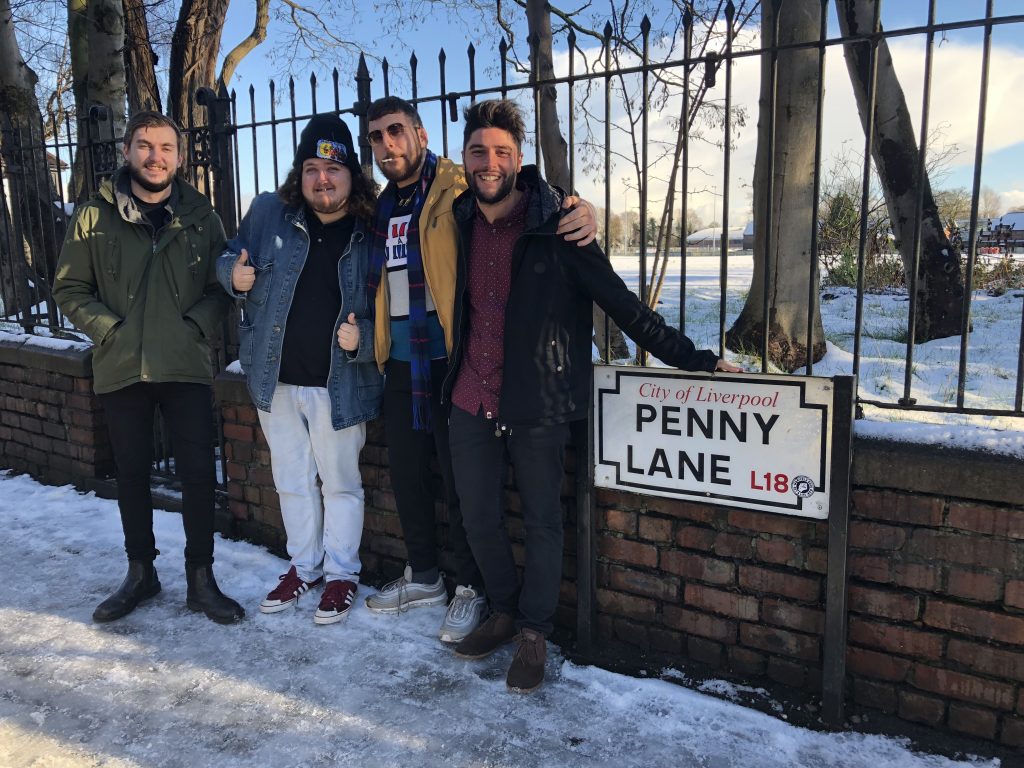 As the tour begins, first stop is the birthplace of the unforgettable song Penny Lane. The somewhat dull and ordinary road makes you realise the phenomenal writing skills of Paul McCartney, forming a bleak road into three minutes of famous song writing by The Beatles.

Next few stops include the houses of all four Beatles, but it really is the homes of Ringo and John that hit home the most. Ringo’s childhood house is a part of a very poorly restored street, with rooms not even the size to swing a cat. Now, parked outside of the home that John Lennon grew up in, it is Aunt Mimi’s (Mimi Smith) house that is marked with a blue plaque, dedicated to Lennon’s legacy for restoring his fame, 20+ years after his death. 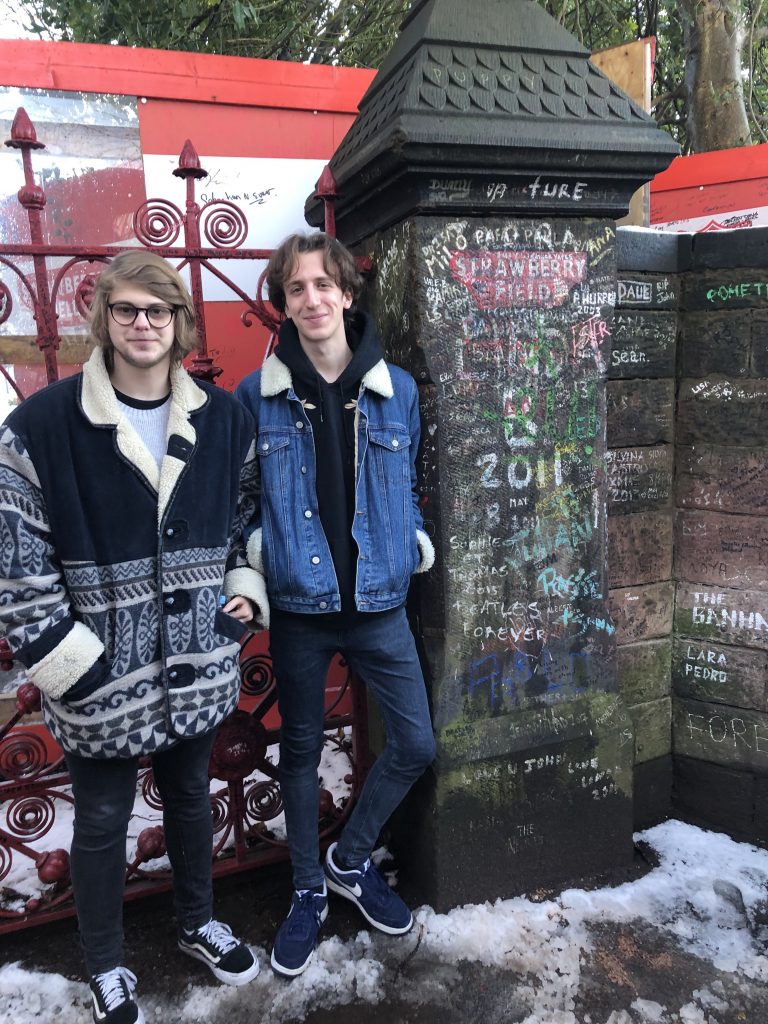 If you know your facts, or even just seen the film ‘Nowhere Boy’, you’ll soon notice that the tour bus parks what can only be a dozen yards away from a huge moment in Lennon’s life, the place where Julia (John’s mother) was hit by a car and unfortunately killed. The hard-hitting fact soon resonates with all on board, with the fitting choice of ‘Julia’ to be played when pulling off.

When revisiting the lives that the ‘Fab Four’ have been through, unfortunately there are some lows, including the death of McCartney’s mother. But what better way to inject a better mood into the tour than ending things where they all began, The Cavern Club.

The truly breath-taking wall decorations include signatures and gifted guitars from the likes of Brian Wilson, Gerry Marsden, and more recent acts like the Arctic Monkeys. But maybe the most surprising decoration of all would be a signed Brazil shirt from none other than Pelé himself.

The night is ended with fitting, dedicated acts performing as much of the Beatles’ discography as possible…and maybe a couple too many pints. Ready for bed, and a Golden Slumber.