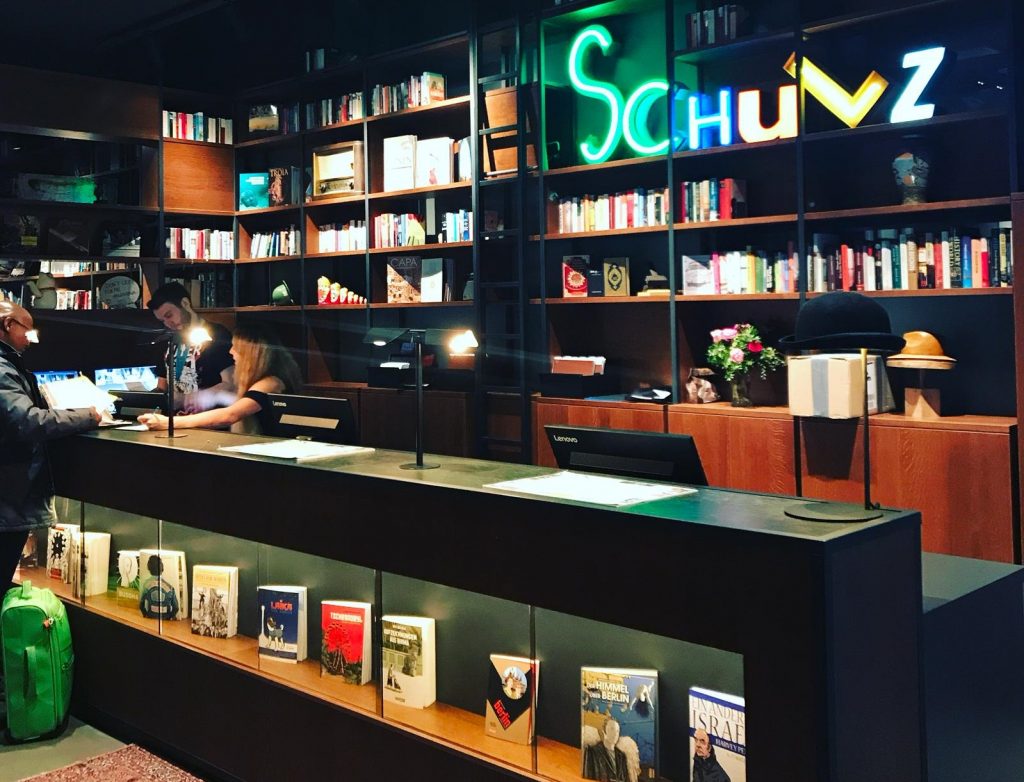 From Burger King to MacDonald’s to Dunkin’ Donuts, Ato Erzan Essien has fast food on the mind in the second instalment from the Department of Media’s study trip to Berlin.

So we made it. The final 22… not a little unlike that bit in any of the Hunger Games films after the big horn blast, just before all hell breaks loose and everyone pretty much dies …or is that Battle Royale…?

Anyway that’s enough morbid thoughts for the day because there is a great deal to be excited about. We all arrived at Manchester Airport and the only drama involved security discovering the secret stash of Lycra in the case that allegedly belonged to me.

“Finally!” I exclaimed somewhere in my imagination, “…Something to tell any future grandchildren that might care to listen…I could regale them with tales of my exploits as an international smuggler (I just won’t mention the Speedos – budgie puns would be inappropriate for young sensibilities) and at last (at last!) my name will be mentioned in the same breath as my beloved grandad JBK Thomas, who it was said smuggled guns to the Republicans during the Spanish Civil War, etc, etc….

Unfortunately the extensive elastaine couture left airport security disappointingly nonplussed. It was the Nivea roll-on (with 48-hour protection) that did for me. I had neglected to place it in an appropriate clear plastic bag as I was helpfully reminded as I scuttled off in the direction of Duty-Free.

So as underwhelming as the start of the Berlin odyssey has been so far in terms of potentially illegal and/or criminal activity, if enduring a bag search is the scariest experience we have as a group over the next few days then I really have no complaints. I just won’t have much to talk about to the future grandkids.

I wasn’t going to bring this up for fear of poisoning the general air of positivity surrounding the trip so far but it is my duty as a middle-aged man to have a good moan. Airport Burger King – did you see those prices? Since when has a fast food burger cost nearly 10 quid? And that wasn’t the worst apparently – one of our esteemed company told me he paid in the region of £11 for what he described as the smallest meal of bangers and mash he had ever had.

So hats off to Boots who sold tuna or chicken mayo sandwiches for a £1 – so it was a no-brainier really and a hearty two-fingered salute to those thieving outlets who obviously think nothing of taking advantage of the tired, and hard-up, harassed and generally stressed out travellers who are left with little choice but to pay through the nose for much-needed sustenance from them.

Anyway, soapbox moment over. I feel a campaign coming on.

And not long after that we were on the plane and taking off – my favourite part of the flight… like being on a rollercoaster minus the arms-in the-air-and-screaming bit. Actually, I did all that – stripped down to my underpants – but in my head.

The hotel is gorgeous, a great big building with great long corridors that appear to finish up in another country – perhaps Poland which isn’t too far away relatively speaking.

The Schulz has only been in operation since last Summer and appears to have been designed with students in mind, a cross between hipster cool and hippy chick with a generous dash of bohemian sauce. Everyone seems to be really taken with it, helped even more by the friendly staff and relaxed, friendly atmosphere.

Many of us gathered for drinks in the bar area soon after arriving followed by a trip over the road to the Ostbahnhof station where there was a McDonalds restaurant.

Needless to say, it did a brisk trade in all things burger and fries to our lot. However, the night would have been perfect had the Dunkin’ Donuts been open also for a welcome chaser to follow the McMain course. But alas, it was closed and I was left to anticipate a quick trip in the morning instead – to complete what I am certain is going to be a lovely breakfast at the beginning of our first full day in Berlin.