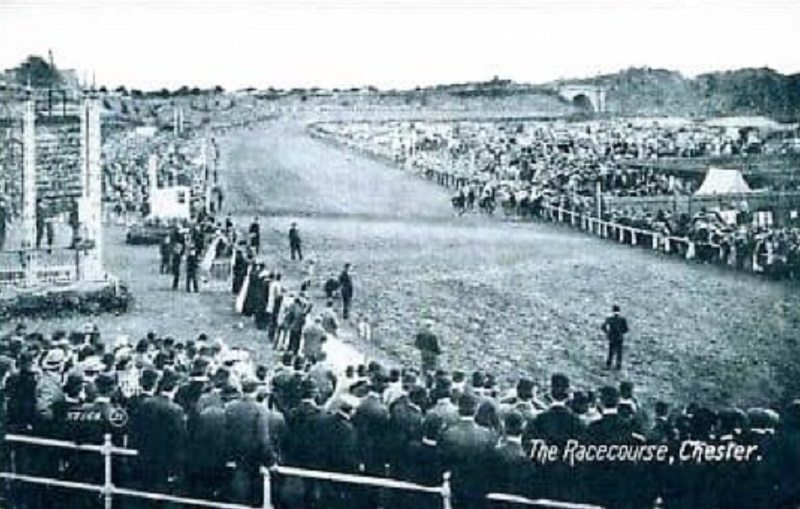 This feature was researched and written by MA Journalism student Ruoyang Wang for a live news day submission.

What do you remember about Chester Roodee? It’s safe to assume that many memories of the racecourse revolve around drinking, betting and winning or losing.

But actually, some of the best memories are stranger than that: how about a parachutist landing in the back garden, young football teams forced to change kit on the racecourse, schoolgirls taking lessons in the stands, a 5-year-old boy running a furlong, and a man in colourful clothes and headdress.

These are the fond and funny memories that emerged when Chester people were told about Chester’s Grosvenor Museum’s new exhibition ‘Going the Distance: 480 Years of Racing at the Roodee’, which will run from 20 April to 6 October.

Maxine Jones from Chester, said: “I remember a parachutist landing in our back garden in the mid 70s when they were practicing on the Roodee for the open day they used to have.

“My dad gave him a large whiskey and took him back to the Roodee in his lorry.”

John Kennedy from Chester remembered playing football at the Roodee.

He said when he was in the St Werburgh’s school football team, the whole team members were escorted from Union Walk to the racecourse, which was quite a way!

They had to change on the pitch before and after the game.

He said: “[The] weather [was] always wet, so we were always covered in mud and having to change back into school uniform and then jump a bus home to Hoole. We were also taken there from school to run around the racecourse: one mile and one furlong. I have run that course so many times!”

For some people, the race course became part of regular family conversation, even if they couldn’t afford to attend.

Sue Fogarty, of Chester, said: “If we mentioned the weather being hot or cold for the time of the year, my dad would always say “I remember when it snowed at May races”.

“We only watched from the walls, we could not afford to go in. This was in the 50s.”

Mark Barratt, now living in Wollongong, New South Wales, said that his favourite memory about the Chester Roodee was going down to the Roodee with his Dad as a small boy in the 60s.

He said: “We would run laps of the course. It was where I really learnt how to run and developed my lifelong love of running.”

Peter Mackay, better known to punters as “Prince Honolulu” was a tipster who travelled around Britain making money by selling betting advice.

Some race-goers remember him standing on Grosvenor Road selling tips when he wore a red Indian headdress and colourful clothes.

George Woodworth and Maureen Povey from Chester said he used to shout: “I got a horse, I got a horse!”

Audrey Hamilton from Chester, said: “I was on Grosvenor road watching the racing with my four-month-old daughter in her pram and Prince Honolulu came by and gave her a kiss. He was a spectacular figure in his colourful clothes and headdress. He used to sell envelopes with tips in for sixpence.”

But it wasn’t always about betting: Vivienne Wendy Jones, now living in United States, remembers when the stands were put to an unusual purpose.

She said: “I’m sure you have so many people who have memories of their first two years of attending Love Street School when they were spent having the county stands as our classrooms.”

Sandra Lacey Barrett, from Chester, added: “My mum Pat Dodd used to tell me she went there for cooking classes.”

Finally, of course, there are memorable moments of well-placed bets.

Tony White from Chester, said: “In the early 70s [we] spent a glorious day on “Lousy Hill” [where people used to sneak a peek of the track] watching the races. My wife and I bet on a horse called Bombay Duck which won easily. We bought a tent with our winnings which we only threw out last year!”

If anyone has postcards, memorabilia and other artefacts, Grosvenor Museum would like to hear from you.

Councillor Louise Gittins, Cabinet Member Communities and Wellbeing said: “This new exhibition is being produced with the Racecourse but we’d like some help.

“The museum is inviting people to donate objects or photographs relating to the racecourse to build up a permanent archive in the museum. Some of the donated items will go on display for the duration of this exhibition. If people are very attached to the objects they will be returned after the exhibition whilst photographs can be scanned.”

The museum is interested in anything from race badges, programmes and photographs to hats and fascinators from the past 480 years.

*You can find out more about the University of Chester’s MA Journalism HERE.