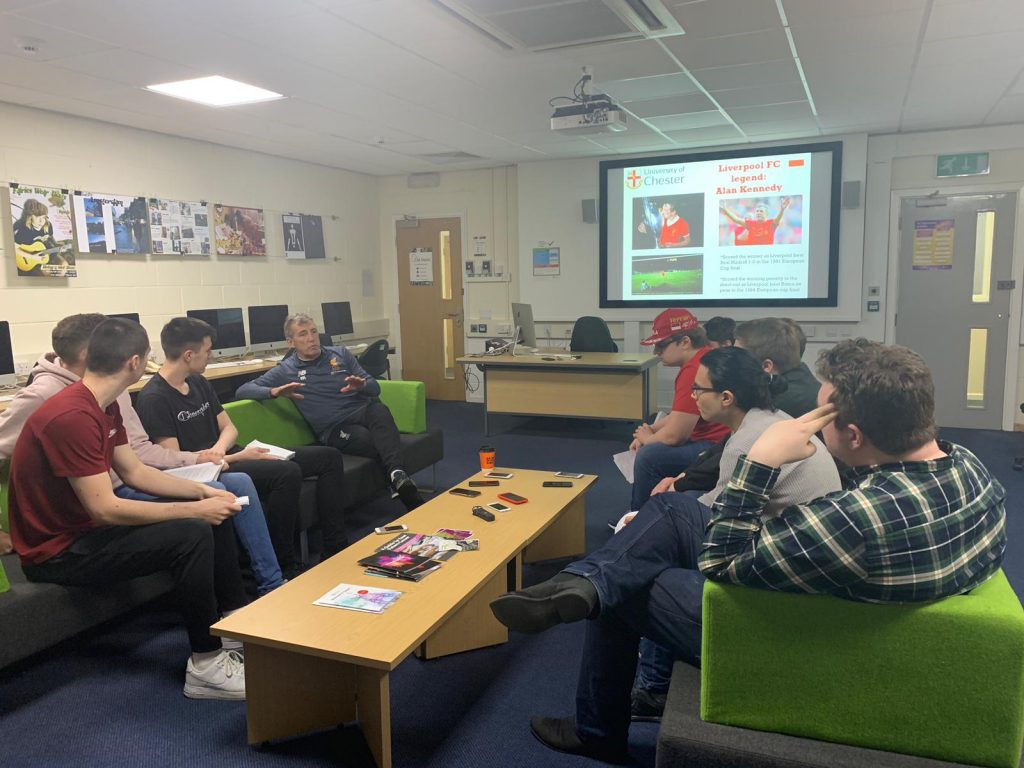 One day you are talking to University of Chester students, the next you are marking Brazilian superstar Cafu at Anfield.

Alas, it wasn’t the lecturers playing before The Kop but former Liverpool FC defender Alan Kennedy who again took centre stage when he visited our Parkgate Road campus to chat with BA Sports Journalism students.

In the same week Kennedy stepped out for Liverpool Legends to face AC Milan, the two-time European Cup winner was happy to be interviewed by first years on the Sports Writing module.

Kennedy recalled his match winning goals in both the 1981 and 1984 European Cup finals and told fascinating stories from a 22-year professional career that delivered over 10 major honours.

“Interviewing a two-time European Cup winner is something that you never expect to do at University, never mind in the first year of the course,” said Dan.

“Getting the chance to interview Liverpool legend Alan Kennedy was something that blew all expectations.”

Dan described Kennedy as ‘humble and passionate’ and explained how he was understanding of the position Sports Journalism students are in, learning the skills to equip them for professional careers in the sports media industries.

Added Dan: “He told some of the most amazing stories from an outstanding career, the two most notable being his European Cup winning goals.

“Having someone like Alan Kennedy come into a session is massively helpful for developing our skills, both writing and communication wise. You need to ensure you are fully prepared for the interview with background information, career history, relevant questions and a story angle in mind. These are all key components when preparing for an interview.”

“We have been lucky with the people that have come in to talk to us,” said Dan.

“Everyone in the group enjoys it when a guest speaker comes in. Not only is it fun to interview a guest speaker, it gives us a better understanding of how people in the sports industry conduct themselves in interviews. Some people are more reserved while others are energetic. But all of the guest speakers are always polite and helpful.”

Senior Lecturer in Sports Journalism and Sports Writing module leader Paul Hassall regularly calls on his contacts to arrange guest sessions to ensure students are prepared when they secure their own interviews.

Said Paul: “It was fantastic that someone of Alan’s stature gave up his time to help our Sports Journalism students with their interview technique for feature writing.

“It’s important the students experience these type of real-world scenarios with genuine sporting figures, and being able to call upon someone with Alan’s profile is great for the programme as a whole.

“It was particularly good of AK to come to campus in what was a very busy week, as he was gearing up for the Liverpool Legends game versus AC Milan at Anfield.”

*Find out more about the University of Chester’s BA Sports Journalism course here.