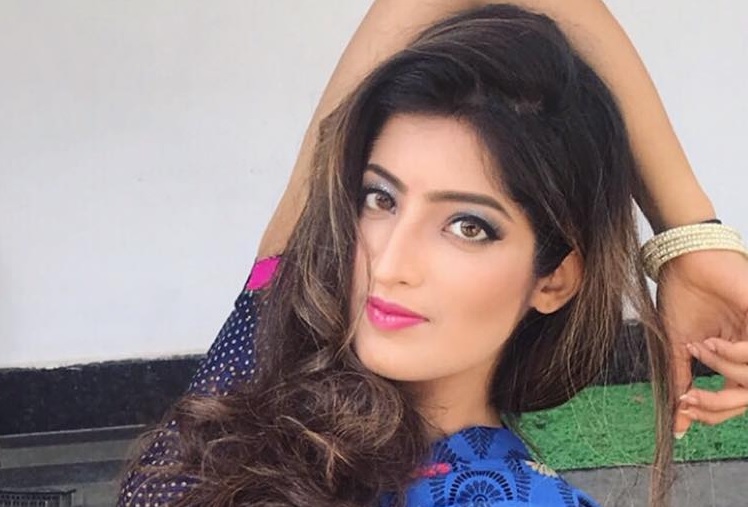 Kimaya Kalra is a rising star in India, featuring on catwalks and in music videos. But success comes with sacrifices. BA Journalism student Tashmit Ganai caught up with her old schoolfriend.

I could see a young brunette woman with a bright smile on her face and eyes wide open.

The second my video connected to hers, I heard a very sharp “Heyyy” followed by: “How are youuu? It has been so long since I spoke to you.”

The enthusiasm on her face was shining nearly as bright as the colours of her clothes. It seemed she might have just finished a shoot. She was wearing a navy coloured  with golden embroidery and green piping around the edges.

She had glam makeup on but no jewellery, which was a little strange to me as jewellery is a big part of Bollywood.

Most recently she appeared on the runway at the Asian Designer Week at the end of April and now is travelling across India to finish shooting for various album songs.

From my school days, I always remembered her as the kind of daughter any parent would want.

She was an extremely outgoing and brilliant student and evidently still is. Kimaya always topped the class, took parts in various co-curriculum activities, and was chosen as the Head-girl of the school in 12th grade.

She described herself as a nerd and chubby, and always the teachers’ pet.

Her closest friend Puja Yadav described Kimaya as always being a very studious person and recalled the time she passed CLAT exam without any preparations.

She said: “I have seen her struggle – the days she didn’t eat anything to lose weight, but she was very determined so I always knew it doesn’t matter if it’s acting or civil service, she will be the best version of herself.”

Indeed, Kimaya went from being an ordinary girl with the dream of joining the civil services to conquering the fashion industry. Soon she will start shooting for her debut film, Mahadeva, which will be released in 5 different languages.

Her story is very inspiring and unique, yet it resonates with a very common issue faced by women in our society – body shaming.

She recalled being rejected by an artist after being recommended by her mum as the leading actor in his song, because was “a bit chubby”.

She said: “At that point, it hit me really hard. I felt rejected without any reason. Although, I didn’t want to go into acting, I decided that no matter what now I’ll lose weight and be featured in his album.”

After four months she lost 21 kgs and the same guy asked her to be a part of her album, which she accepted.

“That was the time,” she recalls, “everything changed. It was my moment, after which I did not stop.”

She has also walked ramps for celebrity designer Rosy Ahluwalia and big brands like Bella Casa, Caprese and Carlton bags.

She is the model for beauty pageant Eva India, the brand model for North East Icon India Season 5, and the face for Radisson Blu Andheri East Hotel.

Kimaya is also very aware of the bad side of being in such a competitive industry. She said even though being the show stopper, she was not treated very well and felt being pushed to the side.

“Everybody said that to me. I knew that my walk was the best walk. So, it doesn’t matter to me what is happening behind the stage, when it’s time for me to prove myself, I have always done that.”

Kimaya is honest and open with her opinion on body shaming and the pressure that is put on women to be beautiful and slim.

She said: “Even when I was chubby and fat, I could have gone for acting but people humiliated me so much that I had to reduce my weight even though acting is not about weight. It’s about how you act.

“But we can’t change everyone’s mindset, so we just try to change ourselves in the end. Of course, I don’t support all this, I have suffered myself so much that I totally oppose it.

“The fashion society of my college rejected me because I was overweight. Although, in my third year, when I lost weight, they came back to me and asked me to apply for the Vice president. I said I don’t want to be a part of your fashion society.”

To finish, Kimaya has excellent advice for people in similar situations: “I would just advise one thing. Go for your dreams but not at the cost of your dignity. Never ever lose your self-respect and dignity. That’s it.”