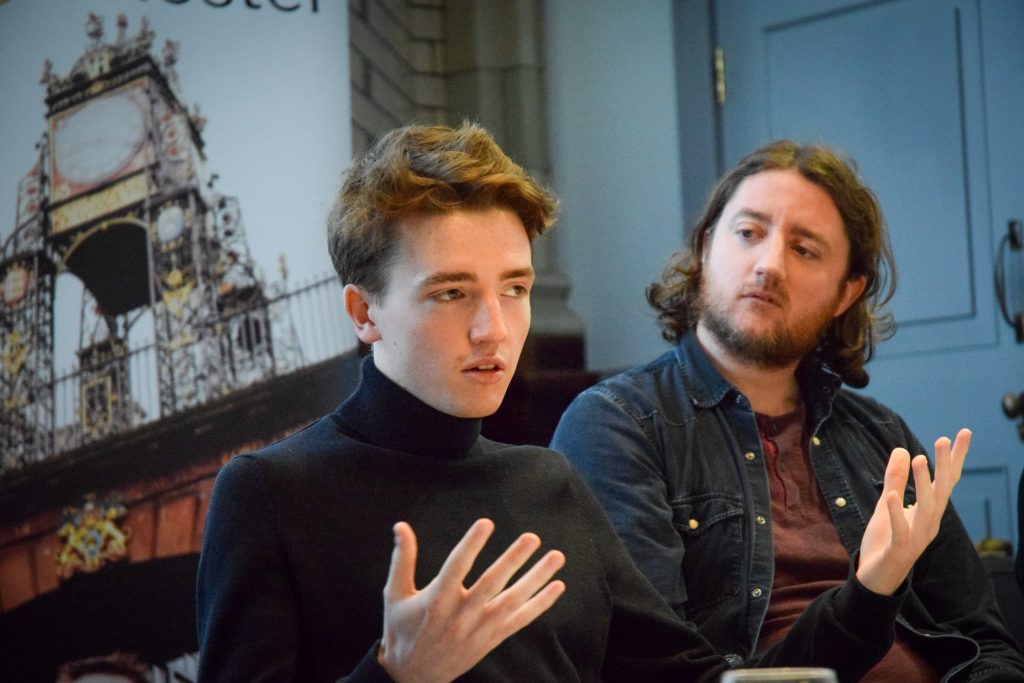 A University of Chester music journalism student has made his first panel appearance at a festival.

Jon-Paul Berry, a second year student on the Parkgate Campus, was invited to take part in the Louder than Words festival which took place this weekend from November 8 to 10.

Encouraged by Music Journalism BA programme leader and Louder than Words organiser Dr Simon Morrison, Jon-Paul joined the table at the “Writing about music is like Dancing About Architecture” debate.

Dr Morrison said: “A famous comment (erroneously attributed to Elvis Costello) suggested that writing about music is like ‘dancing about architecture’, in other words… a tricky, abstract thing to even attempt.  However, many careers have been forged by those interested in working the worlds of music and writing.

“Working as a music journalist can be your backstage pass to the best gigs, the biggest festivals, and the most spectacular club nights on the planet.”

The panel explored whether this a skill that writers – past and present – are born with, or if it is something that can, for instance, be taught at university.

Jon-Paul said: “This was my first experience of doing something like this. It was great. It was very daunting being sat on a table with accomplished music journalists – it was quite surreal. But being asked questions by them, being brought into the conversation, it felt like they wanted to hear my opinions.

“I went to Louder than Words before as part of an assessment where we’re asked to review the event. It’s not just an opinion piece; we’re asked to look at the social and cultural relevance of everything. It’s also a great opportunity to network and get quotes from people. I absolutely would go again. It was one of the best experiences at university I’ve had so far.”

“They get some massive names, like Thurston Moore, of Sonic Youth. I wanted to see him. It’s also great to hear John Robb, a punk rocker and music journalist who runs the Louder than War website.”

“The course so far has opened so many doors. It’s also broadened my taste. When I first came in, it was quite narrow; I liked indie and rock. Simon does this thing called the digital jukebox where students recommend a song. At first everyone was worried about being judged, but now we all put our hands up when it’s time to put a track forward. I’ve started listening to a lot of world music now, particularly African and Icelandic.”