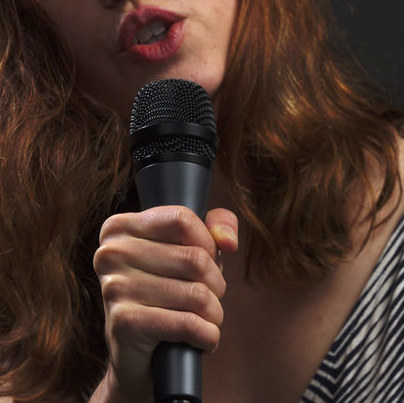 Imagine for a moment that it’s 2010, and a little girl looks towards her grandparents’ house with a smile on her face.

In her tiny hands, she holds a piece of paper, decorated with pens, pencils and sparkly glitter.

The edge of the page gets caught in the letterbox as she excitedly pushes it through.

It’s a carefully handcrafted advertisement for a concert that doesn’t exist.

At the same time, her brother is the event coordinator, scrambling to set the stage. He gets the chairs for their imaginary audience and carefully places the microphone in front of them.

He struggles with a knot in the wire before it’s ready.

The show is about to begin and for young Molly Fryo it is the start of something special.

Skip ahead to today, Molly’s seventeen and she has just been signed to Big Condo Records.

She says: “I think from that moment I felt more like music chose me and not that I just chose music.

“I must have been around seven.”

From a young age Molly Fryo knew what she wanted to be and despite some trials and tribulations, on the twenty-first of September she finally achieved that dream.

Big Condo Records and Partners, a record label that is housed in Liverpool, signed the Wirral based artist this September.

When she first contacted the company, she had no idea she would be signed.

She says: “Initially, I messaged the label to ask to play on any events and surprisingly they asked me to come in for a meeting and it went from there.”

After a surprisingly calm meeting, she says she was surprised to find the company wanted to sign with her.

She says: “I suppose because of my age I was overwhelmed, because I was putting so much pressure on myself to make sure this was the right decision, even though I’m young and I have so much to learn.

“Afterwards my brain was racing, however a good friend reassured me that I have worked for this which settled me a lot.”

Molly Fryo has one of the most unique voices I’ve ever heard. It seems that she can tackle any sound, whether its acoustic guitar or punk rock.

The best thing about her music are her lyrics. When she sings about a breakup, you really feel the pain and hurt she went through that day.

She says: “Lately I’ve been experimenting with political writing; however, my songs are usually about my journey and growth and to acknowledge my feelings, instead of being dismissive towards myself.”

Though she’s been singing her whole life, one of her first experiences in front of an audience came when she was just fourteen years old.

The youth centre she went to, ‘The Hive’, in Birkenhead, ran a choir called ‘The Edge of Seventeen’, that gave her a taste of the dream job she’s always wanted.

From this, she branched out and found solo gigs wherever she could.

She says: “I enjoyed the freedom of being an independent musician because it’s still something I use as an escape mechanism. However, I’d often find myself in pits of procrastination, however, now I have a team pushing me, encouraging me to work hard and not give up.”

Jaymi-lea Cotgrave, a long-time friend of the singer says that: “The event that had the most impact on me was the first gig she ever did in the Zanzibar Club in Liverpool. The atmosphere was incredible- everybody was singing and dancing, and Molly looked like she was enjoying herself.”

Molly says: “That was my first proper gig. I had done gigs before, and never got paid, but this was my first paid gig with a band as well. It was with my first band Velvet Twist…I was 13 or 14 at the time with not a lot of experience so when I first got on stage, I was terrified. But once I got through the first song I was totally connected to the music.”

Support for her dream hasn’t always come from those around her. When she attended high school, her teachers caused her to doubt herself and her ability.

She says: “[They] tried to drum it into my head that my dreams and aspirations are unrealistic. They told me I had to try harder at school and forget about it.”

When she followed their advice, doubt descended upon her: “I tried that and I weren’t the best academically, so not focussing on music really brought my confidence down.”

But, after leaving high school she didn’t give up. She kept trying and now at the age of seventeen she has achieved her lifelong dream.

Jaymi says: “I knew she’d eventually be signed; she’s got the talent for it! I just never realised it’d be this soon, but I’m glad it is!” You can listen to Molly’s music on SoundCloud and YouTube.

Cover image “The Punk-rocker” by dvanzuijlekom is licensed under CC BY-SA 2.0