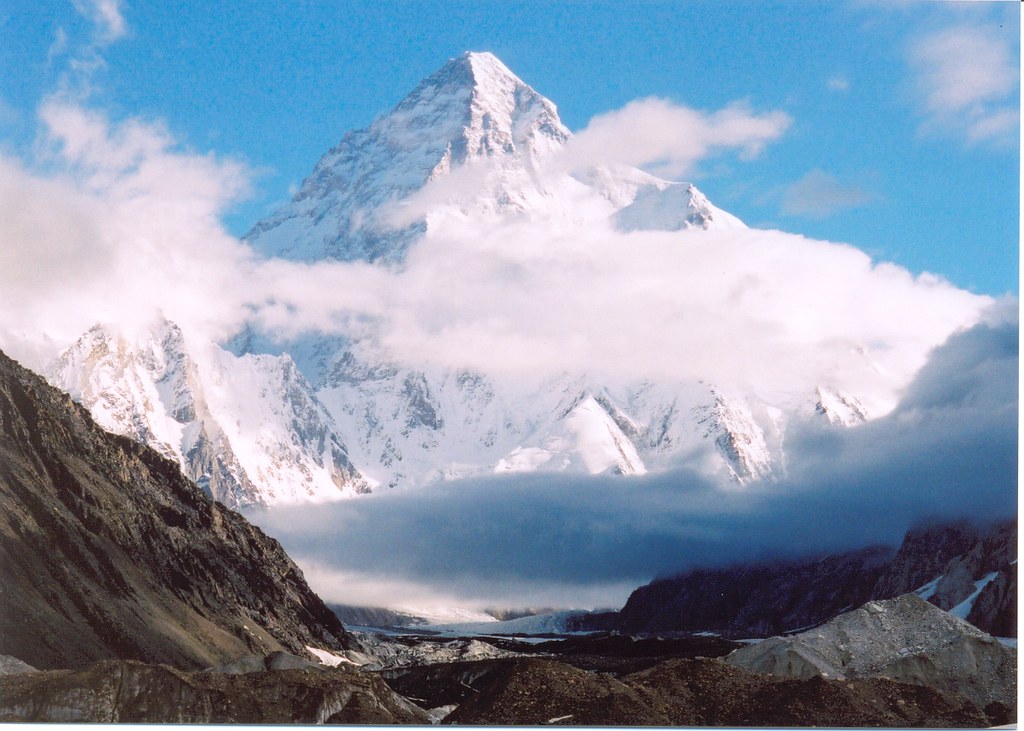 “It stands alone and so has a certain gravitas and beauty about it. It is, I suppose, how we imagine a mountain of our minds to be…. with the opportunity there to fly over it, it wouldn’t be a question of conquering any mountain.

“I would think of my flight as more of a memorial to the people, certainly the women (mountaineers) who have lost their lives. But also, to achieve something that no one else has.”

Catherine Scott, 42, a secondary school teacher from Berkshire, plans to be the first female to pilot a hot air balloon over the mountain in the Karakoram range.

The Coronavirus outbreak has only added fuel to the fire and has increased Mrs Scott’s desire to make her dream become a reality.

As a child, Catherine grew up surrounded by balloons. Her father, David Smith, was an avid pilot and was one of the first commercial balloon operators in the country.

Mr Smith was smitten with the balloons after his first few experiences in an amateur environment. A few years later, he set up his ballooning company, Floating Sensations Ltd., which was operated just like an airline.

Catherine ended up working for the family company after university, where she organised the passengers and sorted out the logistics of each flight.

She did not fly the balloons at the time as she was required to have her pilot’s license. She has only recently gained her license, which she attributes to the birth of her son encouraging her to chase her dream.

She said: “Before Alfie I was so happy just to follow the balloons and organise everything, but it felt so important to take that step to actually fly them…. I wanted to be differentiated from just being a mother. I wanted to do something that was for me.”

The dream of then becoming the first woman to fly over K2 stemmed from Alison Hargreaves, a female British mountaineer.

She was the first British female to climb Mount Everest without supplementary oxygen, but sadly lost her life ascending K2 exactly 3 months later. The mountain itself is inextricably linked to female mountaineers, representing both the tragedy as well as the remarkable.

Mrs Scott knows that the expedition is a huge challenge, and the issues begin way before setting off from base camp in the Karakoram. She must ensure that the balloon is practically suited to the challenge, it needs to have enough fuel to make the climb and leave around 1,000 metres between the balloon and the mountain itself.

Another key issue that you must be so careful with is fire. Oxygen and propane in the same environment are quite the mixture of flammable gases.

In terms of making the operation feasible, there are lots of things to take into account. The most important being money. Equally, the Karakoram range is shared between very volatile areas such as Pakistan, China and Tajikistan.

The political landscape changes frequently as a result of leaders coming in and out of power. Not to forget the idea of getting a balloon there in the first place.

Catherine said “My life’s motto is that the journey is the destination – you have to keep journeying in life and finding the things that float your boat and allow you to enjoy life.

“I think, as much as I don’t want to step back from the dream, we are living in a different world today compared to the one yesterday. The world has changed, but I still don’t think that’s a reason not to dream and not to have these plans.”

Jonathan Harris, secretary of the 3-4-40 Region of the British Balloon and Airship Club, was full of praise for Catherine and her lofty ambitions. He said, “To do something like that, is a really incredible thing… people who enjoy adventure are all a little bit mad aren’t they?” He lauded her bravery as well as her determination to achieve her dream.

He added “It’s very dangerous and there’s lots of training you would need to do….. she’s got that determination and I’ll support her as much as I can, from down here!”

Ballooning has offered Mrs Scott and her family a glimmer of hope during these dark and unprecedented times. Social ballooning remains largely unaffected, and Catherine has been able to spend more time with her family, in particular her father, who has been very ill recently. She rightly points out that balloons give off an element of romanticism.

There’s something enchanting about the globe shape floating through the sky. A slow-moving, magical object that can often symbolise hope and adventure.

She said “Balloons are very photogenic. They seem to offer hope somehow.  I’ve been lucky enough to grow up with them… sometimes I will just go outside and read a book sat in my basket, because it invokes the memories of all of these wonderful adventures.

“I think the idea of having those things to look forward to, when it has been such a depressing, challenging year, and that word unprecedented and what not. I think we all need to have these places that we can go. It’s so important.”